Our living room needed at least a 10′ x 14′ rug. But the selection at that size is limited. Even if I could have found a rug I liked at that size, I probably wouldn’t have been able to afford it.

Plus, I already loved a rug. I couldn’t get it out of my mind. It was the perfect color palette and pattern. When you see it, you’re going to nod and think, That’s so Jackie. This rug called out to me.

This post contains affiliate links to the products shown. I may receive a small commission, at no cost to you, on purchases made after following an affiliate link. See my full disclosure here.

The only problem was the largest size it came in was 7′ x 10′ for $350. It’s a good price for a large wool rug, but honestly, it was more than I wanted to pay. Plus, to make it work in my room, I would need two rugs. At that price—a deal breaker.

I looked high and low, but I could not find another rug. There was nothing out there that could make me forget the perfect (except for the size) rug I’d already found. This rug… 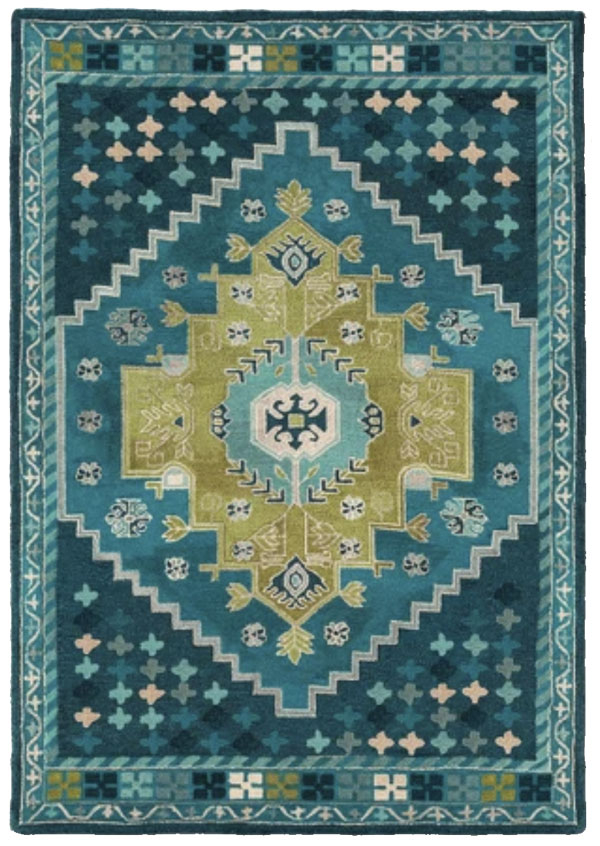 So, I wondered if I could get away with one 7′ x 10′. Or would two rugs like this even look good together to make one big rug? Or, if I’m dreaming big, should I get three rugs and take it all the way into the dining area?

A little photoshop magic confirmed that one 7′ x 10′ just wasn’t big enough. Given the sectional in our living room is 10 feet long, I already knew that, but my wallet was hoping I could somehow make it work.

The tape measure confirmed I couldn’t fit three rugs in the room, even though it looked cool in my crude Photoshop mockup. The room isn’t long enough for three rugs without running right into the kitchen island. As much as my pattern-loving heart wanted to make a bold statement with three medallion rugs forming one giant rug, my wallet was relieved that option wouldn’t work.

The winner was two rugs. So, I resolved to wait for them to go on sale. 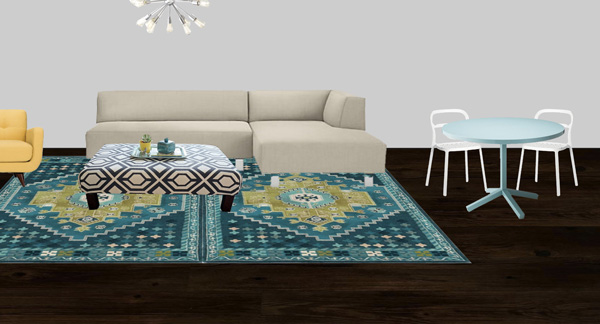 On a whim, just two days later, I looked up my dream rug again, and it was 30% off plus an extra 5% off and free shipping with my Target RedCard, meaning I could get both rugs for less than $500. Score!

I ordered them immediately.

They arrived at the worst possible time. The rugs showed up two days early. We heard a couple of thumps on the door 15 minutes before we were supposed to leave to pick the kids up from school. It wasn’t knocking; it was the delivery person leaning two rolled up 7′ x 10′ rugs up against the door…ready to fall at the moment we opened it. So I opened, and my husband caught the rugs.

Naturally, we opened them immediately even though we had no time. I couldn’t wait. As soon as we opened them rugs, I was in love. In my giddy excitement, we scrambled to shift the furniture out of the way and roll out the rugs side by side. 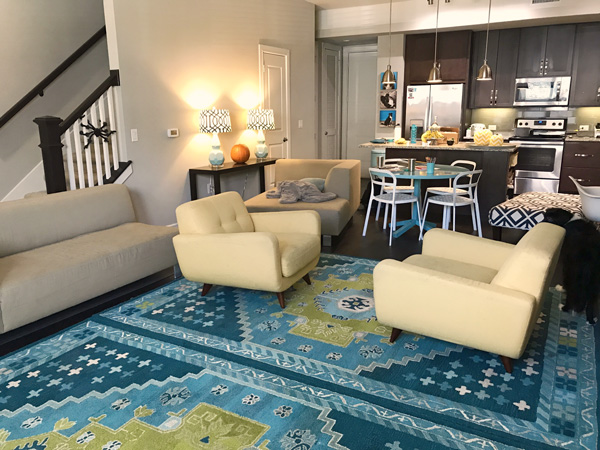 We hurried to put the furniture back and rushed out the door to get the kids. We decided not to say anything and see how long it took the kids to notice the new rugs.

Of course, they noticed right away—my youngest’s eyeballs turned into hearts.😍 We didn’t get these rugs to blend in. In this room, the rugs are the WOW factor.

But to make them work, I’m breaking almost half a dozen rug rules. I’m such a rebel—first the throw pillows and now the rugs. 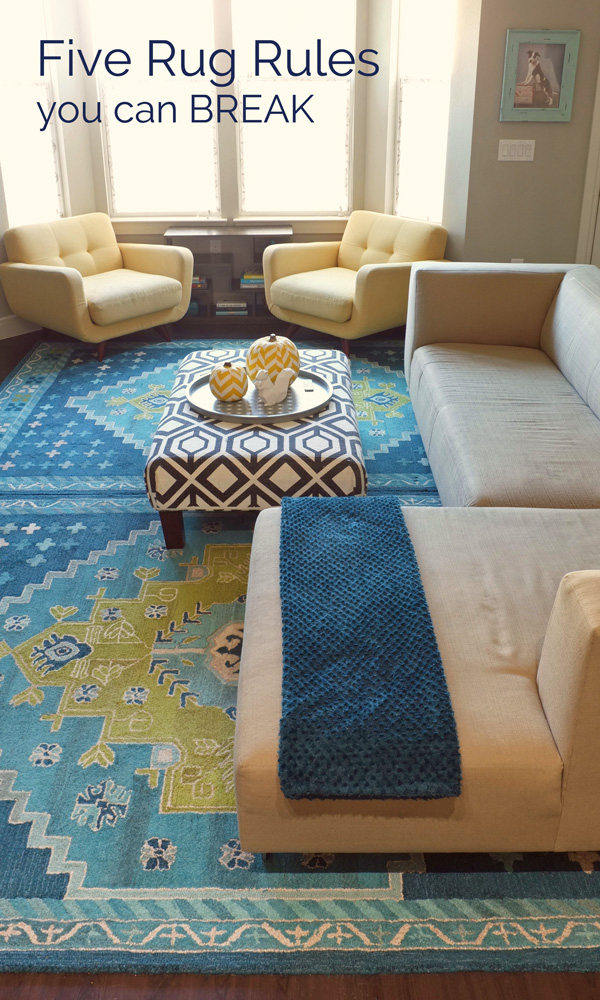 Most designers follow these general rules for rug placement and size (I’ll share how I’m breaking them next):

How and Why to Break the Rug Rules

These are all the ways I’m breaking the rug rules in my living room right now:

I used two rugs together in one room to create one larger rug. There is a “seam” in the middle of our rug where the two smaller rugs meet. To keep the rugs from shifting or separating, we used strips of duct tape to join the rugs together. 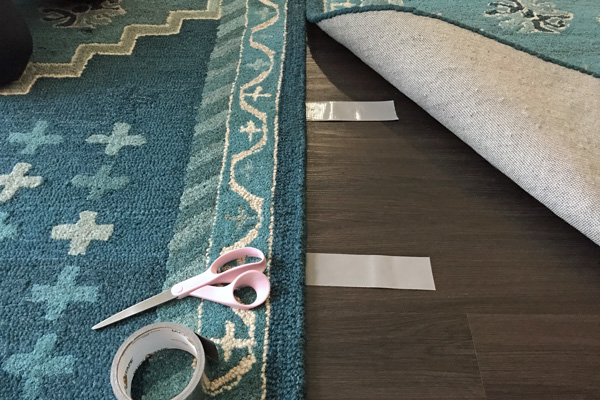 Our rugs are a medallion style with a patterned border. I was worried they might not look good put together as one rug. Doing a mockup in Photoshop and showing my husband, helped me verify the two rugs looked good together side by side.

Even though they have a border design, I think they work butted up together because they don’t have a physical border, like a bound edge. Keep that in mind if you want to use two smaller rugs to create a larger rug. 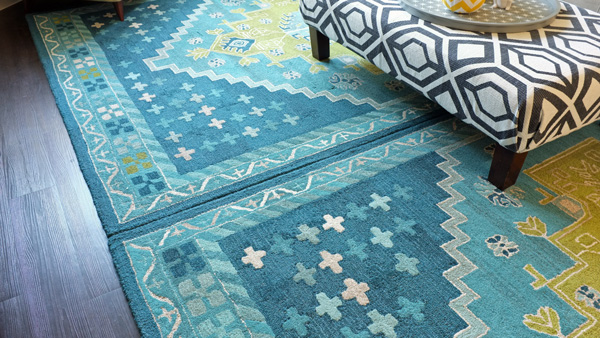 2. Front Feet Only on The Rug

I couldn’t find one rug large enough for the front feet of all the furniture to be on the rug. An 8×10 rug might have worked for the sectional alone, but then the chairs would have been completely off the rug. That would have made the chairs feel separated from the rest of the seating area. One large rug would connect all the seating in the room. To make it work, I put two 8′ x 10′ rugs together. Now the front feet of the sectional and the front legs of the chairs are all on the rug.

Our rugs stop just short of the back of the sectional feet. We wanted to maximize the rug coverage on the rest of the floor, and I didn’t want the rug to poke out just an inch or two behind the sofa. So we positioned it just in front of the back legs, so it doesn’t stick out into the walkway. 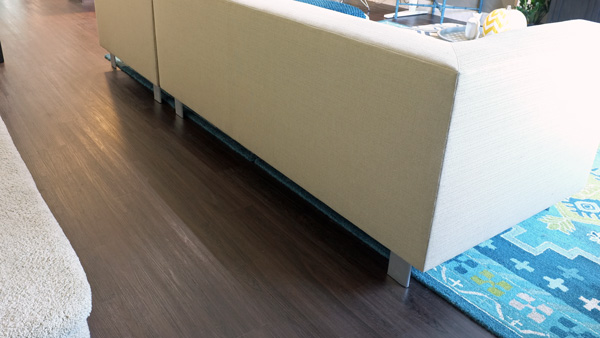 3. Not Centering the Rug on the Sofa

At the end near the dining area, the rug extends barely 6″ past the end of the sectional. I did that because I didn’t want the chairs at the table to get caught up on the rug when they’re pulled out. Since there isn’t enough room for a separate rug in the dining area, I chose to leave the floor naked. 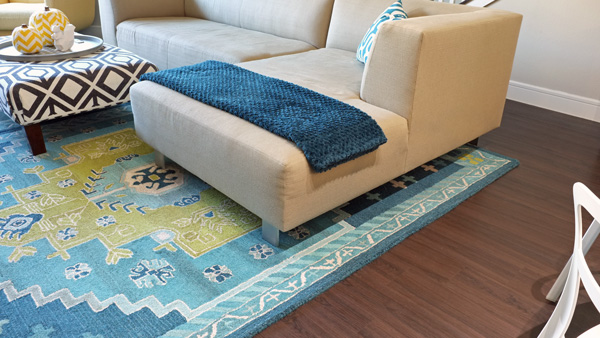 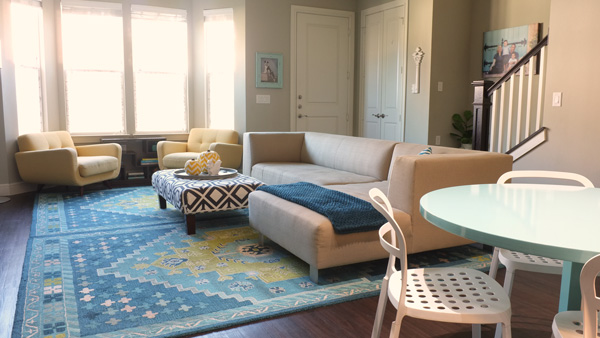 On the other end of the sectional, the rug extends over 24″. That’s so the rug reaches the chairs. We can’t put the chairs closer to the sectional because we need a walkway between them from the front door/stairs into the living room. 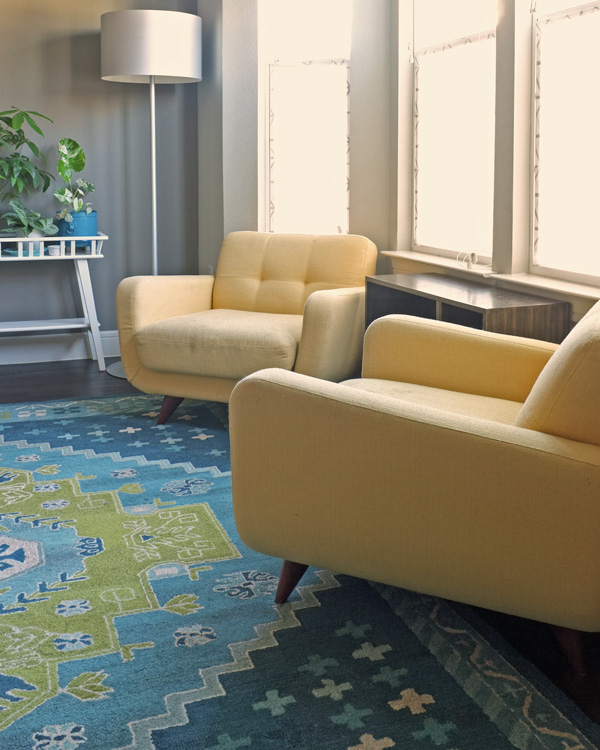 4. Putting the Rug Too Close to the Wall

In general, I think it looks best if you have at least 12-18″ of bare floor bordering your rug. But rooms aren’t all perfectly rectangular, especially at the same ratio as standard rug dimensions. So even in a rectangular room, the amount of bare floor around the rug might vary. We’re following the rule at the front of the room. There’s bare floor under the media center. 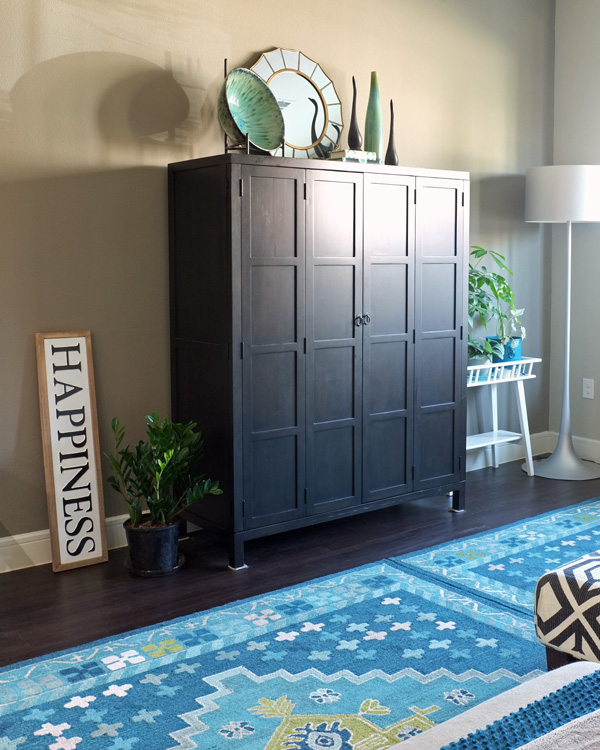 But we threw the rule out the window near the bay window. Because of the shape of the room, the rug is only 2″ away from the wall near the front door. I love it because you can see a lot of the rug right when you walk into our home and I think it draws you into the room. 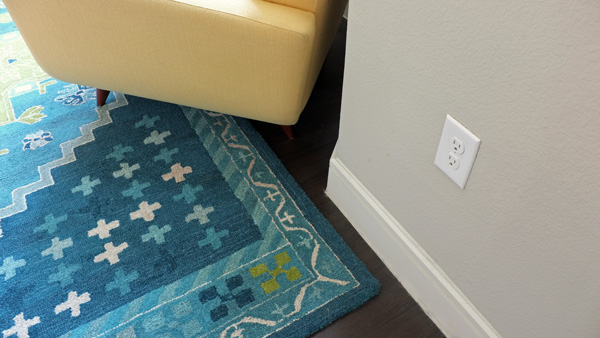 5. Not Centering the Rug in the Room

I love symmetry just as much as the next person, but we couldn’t quite pull it off in this room. I didn’t want the rug to be under the front edges of the entertainment center. So our rug is not centered on the bay window. But it is centered on the media center on the long wall (see the photo above in #5), so the rug and furniture arrangement in the room is still balanced. 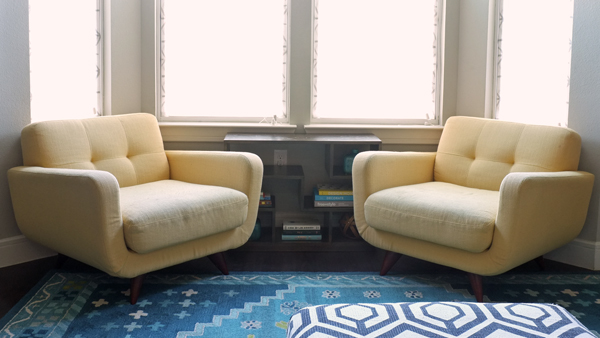 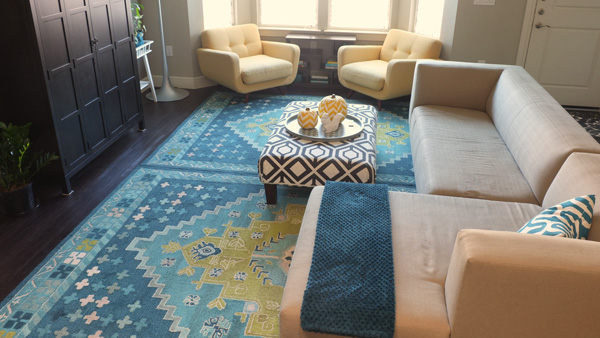 Here’s the thing about design rules: They’re a good guideline and they’ll keep you from making big, unsightly decorating mistakes. They’re a good starting point. But sometimes you have to bend the rules to make them work for your space. That’s okay. Just be intentional about it.

If I could make this room a few feet wider and bump that bay window out, I could have the rug perfectly centered in the room. If they made this gorgeous rug in a 9′ x 12′ or 10′ x 14′, I wouldn’t have had to join two rugs together. But since neither of those things is happening in the real world, I flexed the rules to make my dream rug work for my room. And we love how it looks.

If you’re looking for an affordable wool rug, I recommend the Opalhouse line. The designs are beautiful and their Goodweave Certified. Wool rugs do shed a lot at first, which is completely normal. Just expect to vacuum a wool rug more often in the beginning. The shedding will stop and you’ll have a gorgeous, long-lasting rug.