We got rid of every dresser in our house (except one that we use as a TV stand). All of our bedrooms are dresser free now. I want to show you how we store and organize folded clothes without dressers.

First, you’re probably wondering why we gave away our dressers. The short answer is because we realized we don’t need them. They took up a lot of space in our bedrooms, and after we decluttered our clothes, they were mostly empty. My husband got down to one drawer.

In our kids’ bedrooms, the dresser tops were a magnet for clutter and junk. And, my boys seemed incapable of shutting the drawers after getting dressed. The dressers made their rooms look messy.

A few months ago, my brother (who doesn’t have kids), sent my other brother and me an article about dressers tipping over and killing young kids. We already had the anti-tip kits installed, but not having dressers seems safer. It was just another reason on the list of pros for getting rid of the dressers.

How We Store and Organize Folded Clothes Without Dressers

We no longer use dressers, but we still needed drawers. We still have folded clothes and socks and underwear. We do not hang everything in our closets. We hang almost nothing for the kids because they can’t reach the hanging clothes.

Now, to organize folded clothes, we use IKEA Algot drawer units, one for each of us. The Algot System has a few different drawer choices —solid plastic, wire grid, and wire mesh. We chose the wire mesh drawers because I think they look the nicest and are the best for storing clothes. It’s also a budget-friendly solution—only $41.99 for each four-drawer unit.

The drawer units tuck away nicely in our closets and take up less than a fourth of the floor space compared to our dressers. We are fortunate to have walk-in closets in all of our bedrooms, but these units could fit into any standard closet. 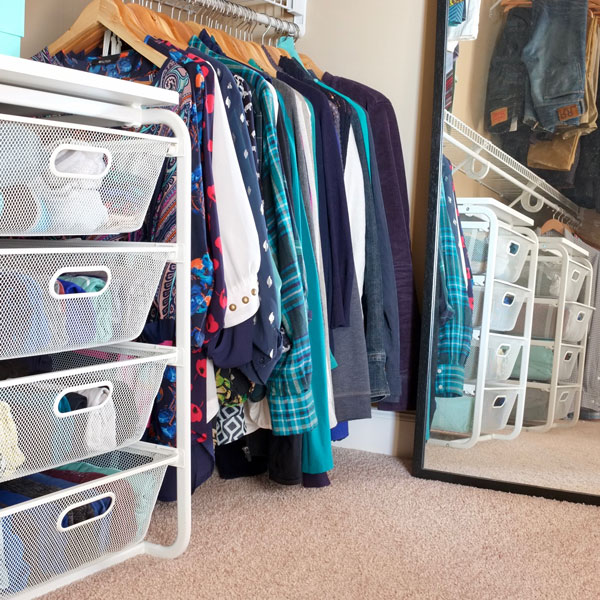 How We Fold Our Clothes

The wire mesh drawers are see-through, which I was nervous about at first. I didn’t want our closets to look like a jumbled, cluttered mess. 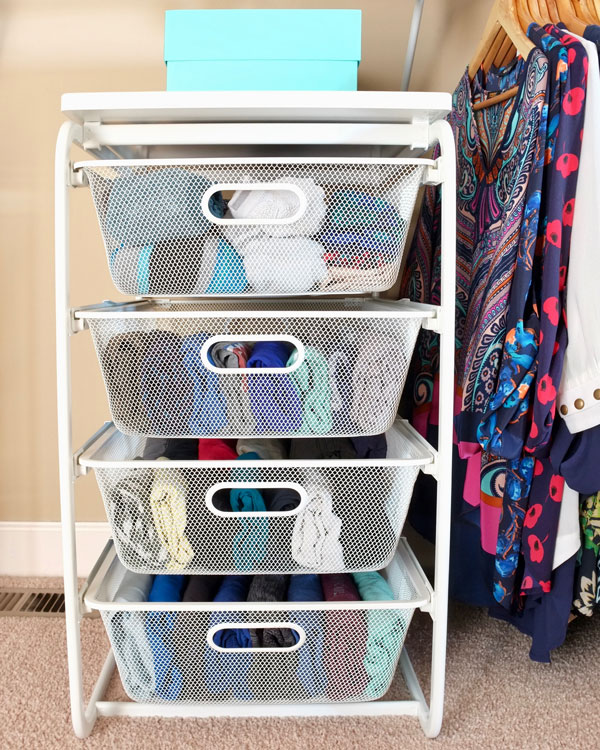 Thankfully, they don’t. The mesh drawers just allow some of the color and silhouette of the contents to peak through. As long as I fold the clothes neatly, the drawers look great. 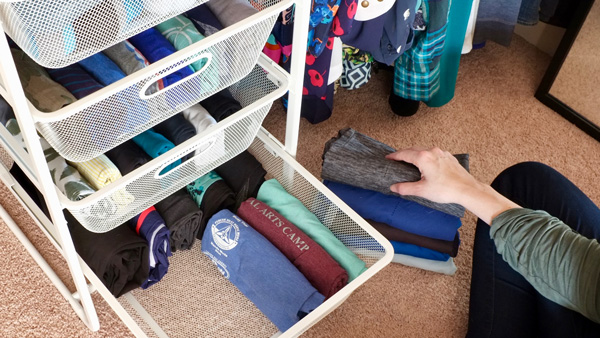 Speaking of folding, we have adopted the Konmari method of folding clothes. When I read about how to fold clothes in the Life-Changing Magic of Tidying Up, it never entirely made sense. Then, my friend Abby from Abby Organizes made a video showing how to fold your clothes using the Konmari method. She included tips on folding kids clothes, too. Since her video came out, I’ve been folding all of our clothes that way. Well, except our socks—I see nothing wrong with balling them up together.

How We Organize Folded Clothes for Kids

Below is a photo of my youngest sons drawers. The top drawer holds pajama sets in the back half, and socks and underwear in the front half. The second drawer holds his t-shirts. If the shirt has a design on it, I fold it, so the design is showing, which makes it easier to find the shirt he wants without yanking them all out of the drawer. The third drawer holds long sleeve shirts. The bottom drawer holds his pants. His bulky sweatshirts, hoodies, and dress shirts hang above his drawer unit. 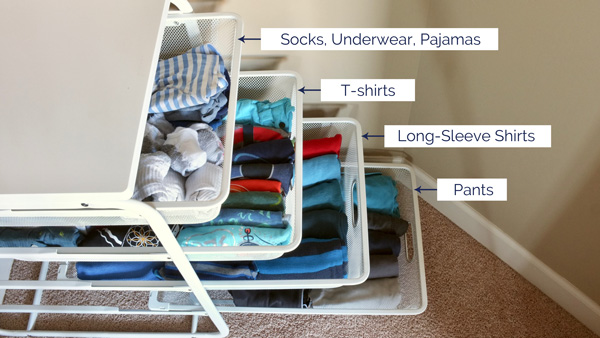 My older sons drawers look similar. Except, his pants are bulkier when folded, so we sometimes hang jeans and lined pants that take up too much space in his bottom drawer. His thin khaki pants, athletic pants, and shorts go in the bottom drawer. 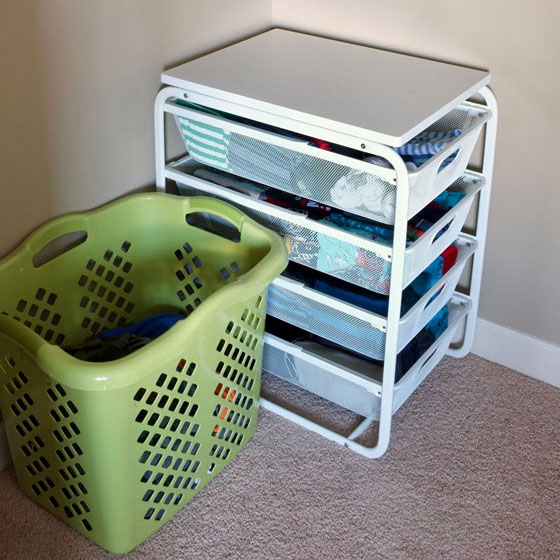 Now the boys use their closets as a dressing room. They each have a hamper right next to their drawers, making it much more likely the dirty clothes goes into the hamper. It’s 95% effective. I can’t explain the other 5% that misses the hamper (or closet) completely.

How We Organize Folded Clothes for Adults

My drawers are set up similarly with a few notable differences because I’m a girl. My top drawer holds sports bras in the back, regular bras in the middle (I only wear wireless bras, so they take up very little space), and socks and underwear in the front. The second drawer holds my t-shirts, always folded with the design facing out. The third drawer holds my shorts in the back half (which sadly I don’t get to wear for three-fourths of the year) and tank tops and camis in the front half, which I wear year-round under other tops. The bottom drawer holds my workout bottoms and tops. 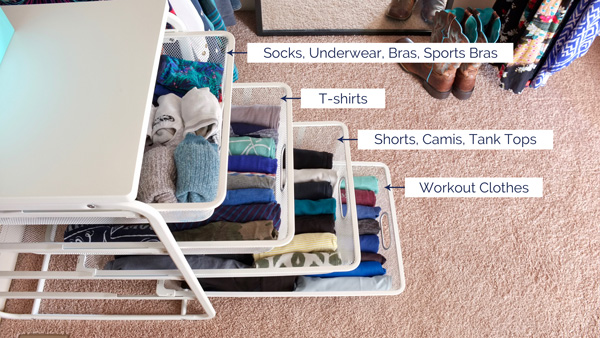 All of my other clothes—pants, blouses, sweaters, skirts, and dresses—are hanging. Still, all of my hanging and folded clothes fits into less than six linear feet of closet space, excluding the space for the floor mirror. 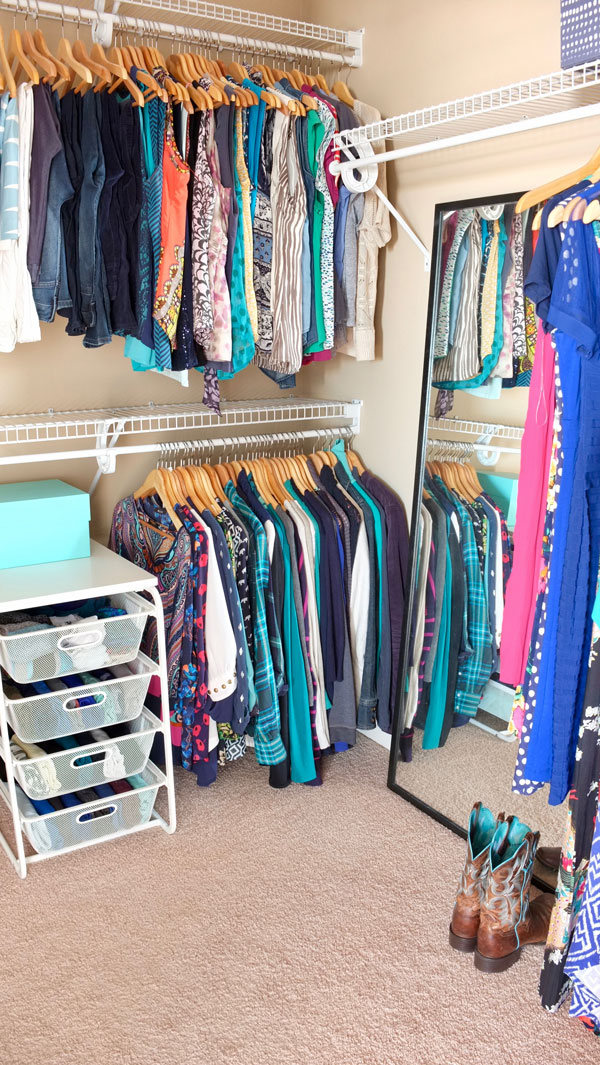 My husband’s drawers are set up like mine, except his top drawer only has socks and boxers. His third drawer holds his long workout pants, and the rest of his workout shorts and t-shirts are in the bottom drawer. He hangs everything else. 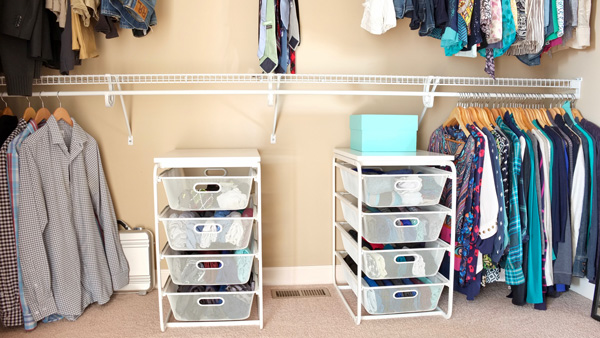 Benefits of Getting Rid of Dressers

When my husband first proposed the idea of getting rid of dressers, I thought he was crazy. I’ve never lived in a room without a dresser. It seems like such an expected piece of bedroom furniture. But once we cleaned out our drawers and realized they were a space-hogging space to stash more clothes than we’d ever need, I came around.

We did a lot of decluttering in our closets, bedrooms, and dressers leading up to this. If you’re curious about my decluttering process, read my article Three Essential Rules for Decluttering Your Home.

By getting rid of our dressers and more effectively using the space in our closets, we’ve made our bedrooms more spacious. In our master bedroom, we gained 18 square feet of space, plus a few more feet because we changed out our nightstands too.

In each of the kids’ rooms, we freed up 10-12 square feet, so now they have more space to play in their bedrooms.

As soon as the dressers were gone, my mind naturally went to how are we going to fill the empty space. Ugh! It’s so ingrained in us to fill every possible space with more stuff. We have decided we will NOT be adding any new furniture to our rooms. Instead, we’re going to enjoy the open space.