You know the one. The project that isn’t just an idea in your head, it’s a half-done eyesore you’ve been putting up with forever. But for some reason it seems easier to ignore, then to finish.

You come up with every possible excuse. Some of them are pretty convincing. Meanwhile, you think about it a lot. Will it ever get done? Is it even worth finishing? Should you just scrap it and start over?

It’s normal to get stuck. Sometimes projects take longer than expected or turn out harder than you thought. Sometimes life just gets in the way. The longer the project sits half-done, the longer it takes you to get back to it. Unfinished almost becomes acceptable. 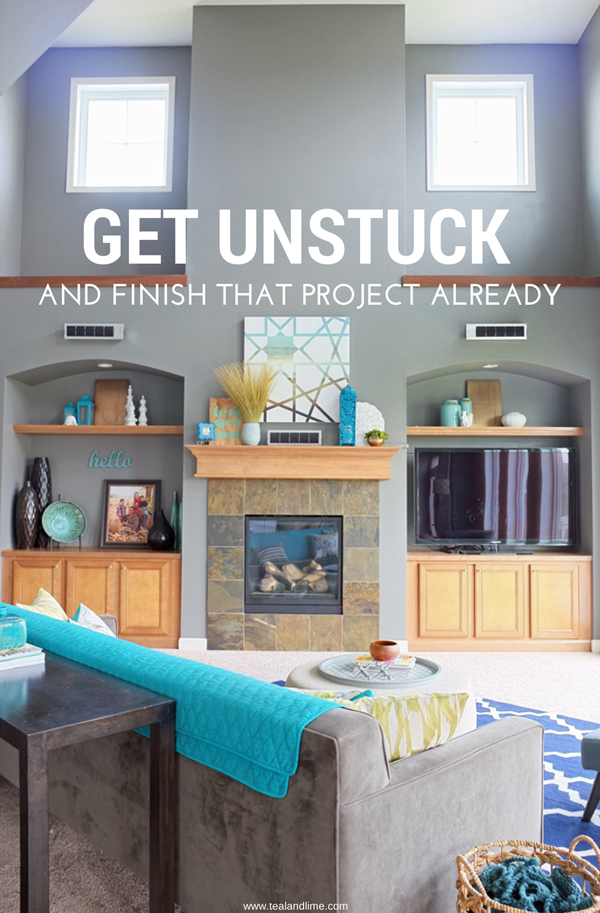 I get stuck, too.  I am a planner through and through.  I tend, more often then not, to finish what I start.  But this one project got the better of me.

For the last few years you’ve seen my living room many, many times. What you might not have realized is the room is 17 ft. tall. We mentioned it in this post about changing a lightbulb on the ceiling and here about painting the walls.

Friends and family know that for the last two years (hangs head in shame), this room has been half-painted. Not like one coat of paint half-painted, but rather one color on the bottom and another color on the top half-painted. The last time we worked on it we ran out of paint and never got back to it.  We’re talking roller marks halfway up the wall.  This was the more finished side of the room. 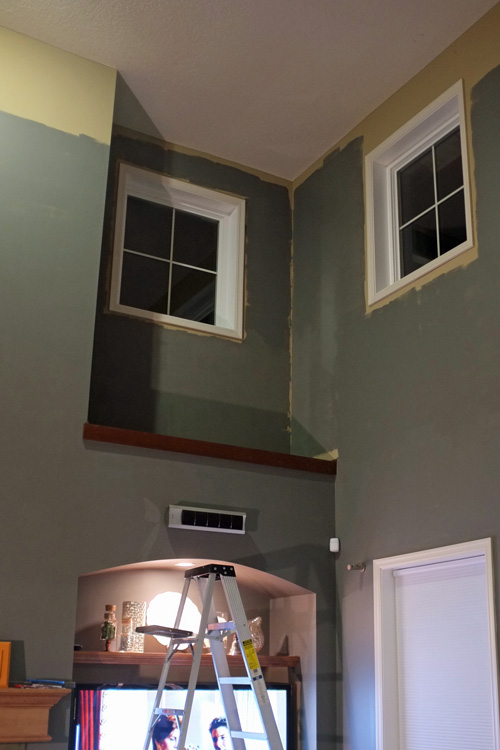 This past weekend we spent about 8 hours over two days finishing the room. I thought this was one project I would never share on the blog, at first because we’d never finish it and then because it would be too embarrassing to admit how long it went half-done.  But the finished result is too good not to share. It feels remarkable to have it done, finally.

I could have let you believe it always looked like this, but I think you need to know my house isn’t picture perfect. It is in many ways a work in progress. We procrastinate sometimes, too.

We love painting, but we are both a little scared of heights (me more than him). We didn’t want to hire a painter (we never have and probably never will, because it’s one job we like). We didn’t want to rent scaffolding (when your scared of heights a rickety metal scaffolding doesn’t help). We made valiant efforts to paint the room, but gave up at 75%. When it came time to trim around the second floor windows and get close to that 17 ft.-high white ceiling we were scaaarrrred. If we bumped the ceiling with the roller or did a bad trim job, we’d mess up the ceiling (which we could barely reach).

So we froze. We didn’t finish. We used every excuse in the book, many totally valid, but none of them were the real reasons we weren’t moving forward. We have full time jobs. We have small kids. We’re out of paint. They discontinued the base paint. Now, they discontinued the paint color. Our ladder isn’t tall enough. It’s too dark to paint at night after the kids are in bed. I could keep going, because there are a million ways we justified this half-done project.

Thankfully, we stopped apologizing for the state of the room years ago. Our friends and family just stopped asking about it. By the way, none of them offered to babysit or help so we could get it done either. So, it just became the elephant in the room.

With my in-laws coming later this week, we decided it was time. All of our excuses were gone or were total BS. When we found out the paint color was discontinued, we went and bought a few gallons. The paint sat there taunting us all week last week. The tan walls stared down upon us, like they had for the last two years. It was time. 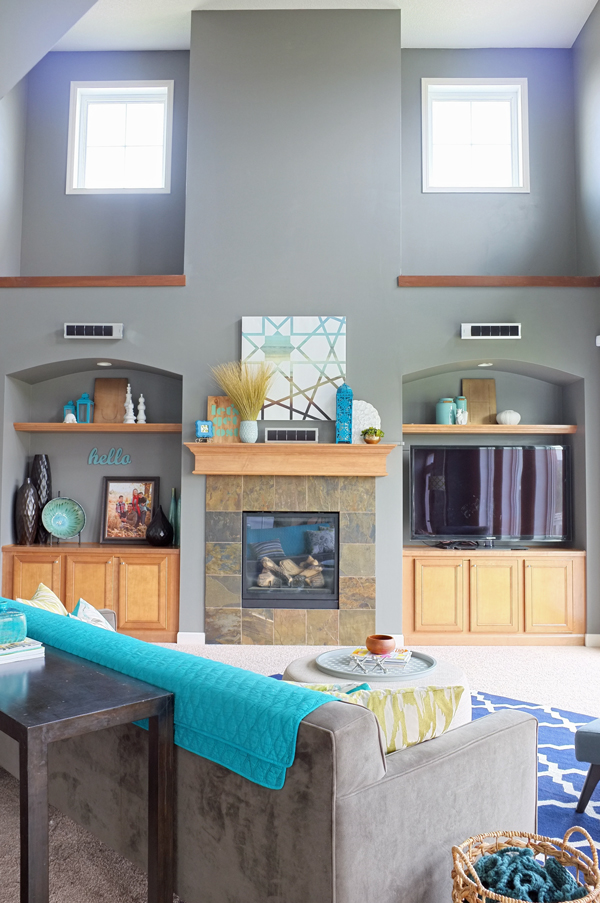 I pulled up my big girl panties and trimmed around the ceiling. From an 8 ft. tall ladder, I used a paint edger on the end of a 12 ft. extension pole. It was the best upper body workout I’ve ever had. Slow and steady, I trimmed the perimeter of the room and miraculously we didn’t have any ceiling mishaps. Two years later and our biggest fear (painting the ceiling) never came true.

Once the trimming was done, the rolling came easy. It took hours and sweat and tears (not really), but it was so worth it. 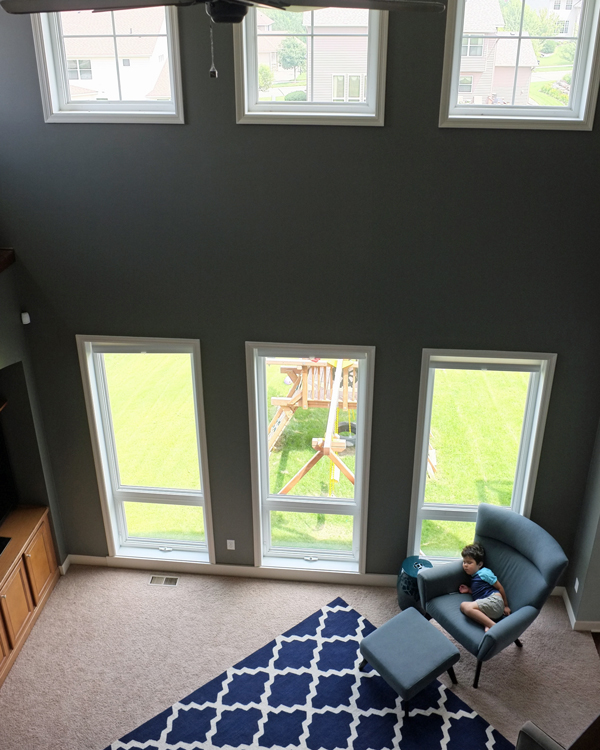 How to Keep Up Project Momentum

It’s normal to get stuck, but it’s not okay to live with half-done projects for over two years.  I don’t want you to wait as long as I did to get your project done.

After sharing this I am not really in any position to give you advice on follow-through, but I think there are a few keys to keeping up project momentum.  Learn from our mistakes and don’t take two years to figure these out.

Keep An Eye On the Big Picture

It got too easy for us to just not look up anymore (literally) and pretend the room was done. We lost sight of how amazing the finished result would be.

Figure Out Why You Are Procrastinating

If it was as simple as running out of time, you would have found more.  If you thought it was too hard to DIY, you would have hired someone to do it.  So, what’s the real reason you aren’t finishing?

We made up a gazillion excuses, but the truth was we were just scared to cut in around the ceiling. We let that 4″ strip of wall touching the pristine white ceiling hold us back from painting the other 17 ft.

Procrastination can be a symptom of being a perfectionist.  It’s classic perfection paralysis; not finishing, because you worry it won’t be perfect.  In the end, I realized living in a sloppy half-painted room was much less perfect than a fully painted room with possible ceiling touch ups required.

Choose a Deadline and Enough Time

Ever notice when there is no deadline things never tend to get done?  Always put yourself on a deadline with a realistic plan that includes enough time to complete the entire project.  If it’s a big project, add some buffer time to the plan.

My in-law’s visit became my deadline.  I could have given myself a deadline much sooner.  It was ridiculous that it went two years between attempts to paint this room. And when we finally got back to it the paint color wasn’t a match, so we ended up re-painting the entire space. It was more work in the end, because we didn’t follow-through from the start.

Should Have Done This Forever Ago

Having an undone project that is still in your head is one thing, having a project you physically started but never finished is another.  Living in a half-done space starts to feel like living a half-baked life.

No matter how much I cleaned the living room, it still looked like a mess.  I over-compensated for it’s undone-ness.  When all along, I should have focused on how to get it done.  Instead we lived for two years in a half-done room that in the end only took 8 hours to finish.  Now, I can finally sit in the room without thinking, “oh yeah, I still need to do that, too.”

The finished room is a night and day difference.  It doesn’t feel like a sloppy mess I prefer not to answer questions about.  It’s not the running inside joke amongst family and friends who probably have bets on when we’ll finish it.  The finished room is beautiful top to bottom.  It makes the whole space feel clean and put together. 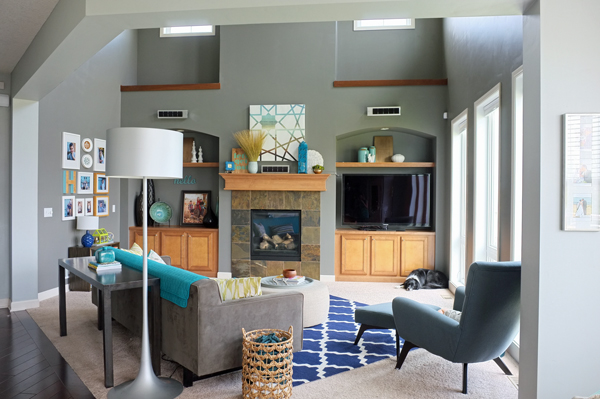 When you finally finish that undone project, you’ll say, “What took me so long?! I should have done this two years ago.”  So, what are you waiting for?  Get the big picture in your sights, find the root of your procrastination, and tackle it with a firm deadline.