I worked my butt off the other day, rearranging the entire living room all by myself.  I dragged our 100″+ couch into it’s new spot.  I moved our beloved Bo to a prime window spot with a great view of the TV.  I turned the rug to align with the angle of the couch.

When my husband got home, he didn’t say anything.  So much for a good surprise.

So, I asked, “What do you think? It feels more open right?!”

He said, “I think it looks fine.”  He might have even thrown in a “we’ll see how it works.”

I was screaming inside my head.

He might as well have said, “I don’t know, I don’t care, and why’d you even do it anyway?” 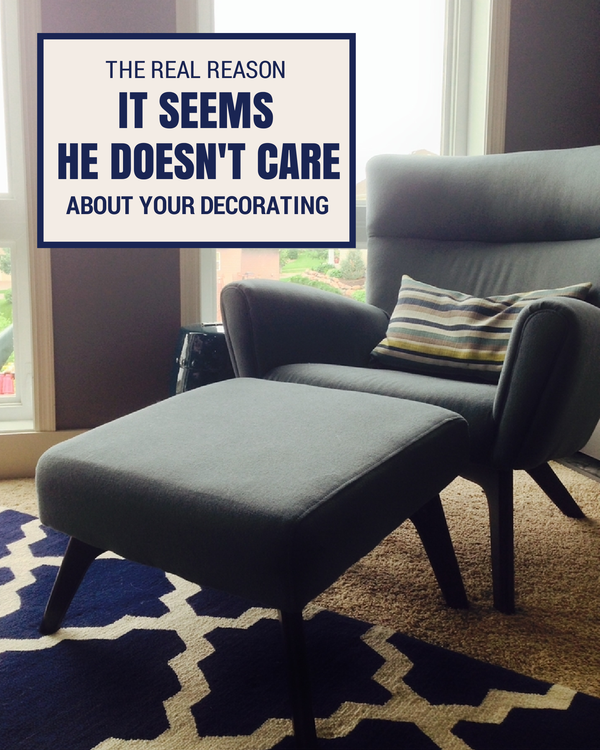 Ugh.  Why does he have to process his opinion for so long?!  Days, people.  It was days later when he mentioned liking Bo’s new spot.  I suspected he liked the switch since he has parked his butt in that chair every evening…seriously, no Bo for me anymore after 6pm.

But, why doesn’t he say it?  Why can’t he tell me right away whether or not he likes it?  You do or you don’t right?

It makes me feel like he doesn’t appreciate the work.  That he doesn’t trust the thought I put into the new layout.  That he’d rather have it some other way, but I would never know because he doesn’t say anything.

I perfected the new layout, which would open up the view out the windows, finally make a proper space for the keyboard, and stop everyone from squeezing around the couch in the 1ft opening that was never supposed to be a walkway.

He never said how he might like the living room re-arranged, because I never told him I was thinking of doing it.

When I decorate, I plan in my head for a while before implementing, which prepares me for the change.  When I actually make the change, I am already comfortable with it.

But the people around me are thrust into change.  They haven’t been prepared.  So when I eagerly ask, “what do you think?”, they’re not ready to answer yet.  They are still adjusting.

I should prepare them better.  Talk about it, share pictures, and tell them when I plan to do it. I should build it up, get their opinions and buy-in, and maybe even their help (what an idea!).

Duh!  You have to prepare people for change.  It helps when they know it is coming.  I know this all too well from my corporate days in a company that went through almost constant restructuring and downsizing.  Although the leaders in the organization know well in advance, the most accepted changes by an organization as a whole (both people being let go and those staying behind) are well-communicated and the people are prepared for the change.

It’s kind of the same in our homes.  Imagine you’re the CEO of your home (that has a nice ring to it) concocting all these plans to make changes in this room and that, without telling anybody else.  Then, one day you spring it on them.

Your husband walks into a dark room and bangs his shin on a chair that didn’t used to be there.  Suddenly, and somewhat understandably, he’s not comfortable with the change.  He’d rather just put it back the way it was.

How to Get Him to Care or At Least Take Notice

The next time your planning a big change, instead of surprising him (and everyone else in the house) and hoping he will love it as much as you, consider letting him in on the big secret.

Give him an opportunity to…

Because we all want him to immediately blurt out, “It looks amazing. Why didn’t we do this sooner?” Followed immediately by, “you’re so good at this honey!”