We canceled our cable TV service! New Year, no cable.  We have always had cable TV…always. We are actually pretty big TV watchers, so this is something we never thought we would do. But, times are changing. 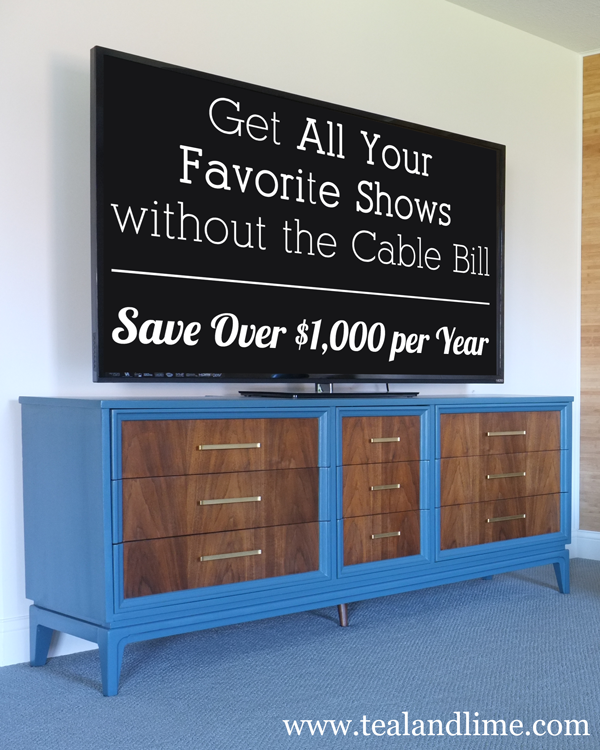 After several rate hikes and our bill climbing just north of $200 per month, we began looking into alternatives. In addition to cable TV, we already had a Netflix subscription and are members of Amazon Prime.

But, we continued to pay for cable. Then, we DVRed everything to watch later on our own DVR (we did not rent one from the cable company). The thing with cable is, what you are really paying for is “live” TV, as in the first airing of a show. Nowadays, there are so many ways to watch shows after their first airing. Since we were recording everything to watch later anyway, it didn’t make sense to keep paying for the privilege to watch it “live”.

Before making the final decision to call the cable company, my hubby did a little audit of the shows we watch. Using our recordings in the DVR, he made a list of all the shows and channels we watch regularly. Then, he did the homework to find out where we could get the same shows without cable.

As a side note, we do not watch televised sports. I have talked with a few friends that would love to cut back on their cable or satellite services, but can’t if they want to watch sports, especially the ones that aren’t broadcast on the mainstream stations. Sorry, we can’t offer any tips there.

What You Need to Capture Your Favorite TV Shows

There are four basic things you need to make this work:

1. Over-The-Air (OTA) Antenna – Allows you to receive Local TV shows with an antenna (like the good old days with rabbit ears).  With higher quality antennas now, you can even capture High Definition television over the air.  TVFool.com is a website that helps you aim the antenna for the best performance.

2. Digital video recorder (DVR) – This allows you to record over the air television to watch later.  You need to make sure the DVR you select is compatible with OTA.  If you search Amazon, you will find several DVRs that are OTA compatible.  A premium option would be the Tivo Romio, but Tivo devices require a subscription.

3.  Subscription Services – Our recommendation is to give all of these subscription services a try, since most offer a trial period.

4.  Streaming Player – A streaming player connects to your TV and allows you to serve up many subscription services, like the ones above.

Here is Exactly What We Use

More specifically, to fully realize cutting our cable bill, while still getting to watch all the shows we love, this is what we use:

1. OTA Antenna: Terk HDTVa ($40, but we already owned one) – Ours hangs out in our office, but you can hook it up directly to the back of the TV, too.  We use the OTA and DVR in our setup mostly to record CBS shows, which are not available through one of the subscription services.

2. DVR: SiliconDust HD Homerun Dual ($130), which easily connects to the antenna and can be placed anywhere in the house, as long as there is network cable available.  The HD Homerun comes with its own software to program and view channel guide information, but we chose to buy the ElGato EyeTV 3 ($80), which runs more smoothly on a Mac.  (Yep, we are Mac people all around!)

3.  Subscriptions: Hulu Plus, Netflix, and Amazon Prime.  We watch most of our television shows on Hulu Plus, except CBS shows.  Netflix is great for prior TV seasons…we love to binge watch shows or have a full season to watch day after day when we work out in our home gym.  We also watch movies and kids shows with Netflix and Amazon Prime.

Lastly, although it is not a subscription service, we buy and rent movies from iTunes, as well.  It is great for new releases.  Also, we buy some shows on iTunes.  USA Network is available on Netflix, but only prior seasons.  We love Covert Affairs and were mid-season when we cut the cable, so we paid a few dollars per episode on iTunes.

4.  Streaming Player: Apple TV (already owned) – Because we are a Mac household this was a logical choice for us and we actually owned several Apple TVs.  With Apple TV we are able to get access to all the content we already purchased from iTunes.  We can also stream our home movies from our computer to our TV.

And, since we own a whole suite of Mac products, like AirBook laptops, iPads, and iPhones, we can display what is on those devices on the TV.  (Our kids are hooked on watching the little Angry Birds videos on the big screen).  The same feature allows us to play YouTube videos on the TV…I love when I am reading blogs and can pop a video I come across onto the big screen. The Apple TV is $99 and works with Hulu Plus, Netflix, and iTunes.  It does not give us access to Amazon Prime, but our new TV in the basement came with that built-in.

If you are not a Mac household, here are several other options for streaming players:

Our total cost for hardware, software and subscriptions was about $350, plus about $15 for monthly subscriptions and $79 yearly for Amazon Prime.  The $350 in hardware and software is a one-time cost, which we will recover in savings on our cable bill within 3 months.

Our Results After Two Months Without Cable TV

We successfully cut our cable bill by over $125 per month, which is a savings of well over $1500 per year. I advertised this post as saving over $1,000 per year to account for new equipment purchases and the fact everyone’s cable bill isn’t as high as ours started.

With our cable company, all we kept was our internet service (the best level they offer). We replaced our cable TV habits with Netflix, Hulu Plus, Amazon Prime, and iTunes.

I know that all sounds like it would be complicated. How do you know where to find what show?  Well, that is what the streaming players do beautifully.  They put everything in one place.  Since we were already an Apple TV family and used it for buying movies, we just go to the same place, but click on Netflix or Hulu Plus to watch other things.

Since we rarely ever watched “live” TV, we haven’t noticed any difference in our TV watching habits. In fact, if anything Netflix and Hulu are helping us explore new shows.  The menus are very visual.  Netflix makes recommendations for you based on your viewing habits.  They also both display a popular category.  Through both services we have discovered new to us shows including Scandal, Walking Dead, Almost Human, and most recently House of Cards (a Netflix exclusive show).

We also noticed, we don’t leave the TV on without notice anymore…you know when you put it on to watch one show and then just leave it on the rest of the day. We have to be a little more deliberate about putting on shows, which we think is a good thing.

The $125+ monthly savings is going to add up to over $1500 saved in 2014! Now to be fair, we incurred the one-time cost for the DVR and eyeTV, and added the Hulu Plus subscription, but those are nominal compared to what we will be saving.

With this savings we plan to put our kids in some extra activities each month…something better for them to be doing than watching TV :)