Thinking in threes is the key to success in your home decorating and styling.  There are many ways to implement the rule of three in decorating, but I want to focus today on grouping objects in threes.

OBJECTS: Placing objects in groups of three (or five or seven for larger arrangements) also creates visual tension and keeps the eye moving about the room. Despite the odd number, the end result will look more balanced than if you just had a pair. Even within the three objects vary the height. Groups of three look great on a coffee table, mantle, or for pictures on the wall.  ~ PROFESSOR RUE: Rule of Three, Rue Daily

For today’s interior styling tip on the rule of three, watch the short video below.  Learn the simple trick to make groupings of three objects easy to put together and visually interesting!

I had too much fun putting this post together. It was an excuse to play with every vase, figurine, and object in my house :) 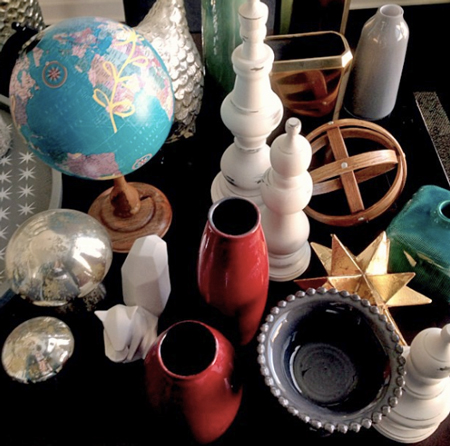 Only one vase got harmed in the making of this video :(

Have you been guilty of buying sets of three?  I know I have.  I actually made the set of three finials in the video, but I always split them up for display or use them in a larger arrangement.