Over the summer we started working on a few updates in my oldest son’s bedroom. He already had the makings of a superhero theme, but I wanted to take it to the next level.

We started out with a quick furniture switcheroo, which allowed us to fit a new desk in his room. Then we tackled a DIY Painterly duvet cover to bring in a fun graphic pattern on his bed. Now, we are back to focusing on the desk area, which needed a big art piece.

His desk corner is what draws your eye first when you walk into the room. I wanted a giant amazing piece of art for above the desk. When I saw this faux newspaper project from I am Momma Hear Me Roar, I knew instantly it was perfect for the space. 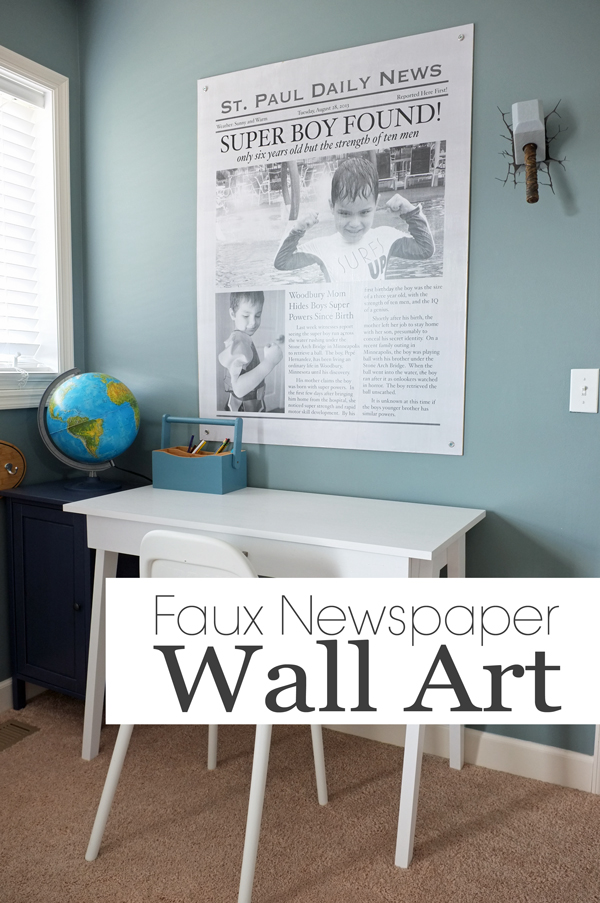 I dusted off my storytelling skills and wrote up a fake newspaper article about my son’s magical powers. Here is the complete text:

Last week witnesses report seeing the super boy run across the water rushing under the Stone Arch Bridge in Minneapolis to retrieve a ball.  The boy, Pepé Hernandez, has been living an ordinary life in Minnesota until his discovery.

His mother claims the boy was born with super powers.  In the first few days after bringing him home from the hospital, she noticed super strength and rapid motor skill development.  By his first birthday the boy was the size of a three-year old with the strength of ten men, and the IQ of a genius.

Shortly after the birth, the mother left her job to stay home with her son, presumably to conceal his secret identity.  On a recent family outing in Minneapolis, the boy was playing ball with his brother under the Stone Arch Bridge.  When the ball went into the water, the boy ran after it as onlookers watched in horror.  The boy retrieved the ball unscathed.

It is unknown at this time if the boy’s younger brother has similar powers.

To design the newspaper, I used a somewhat boring newsletter template in Pages on my Mac. I made up the fake newspaper name, date, and weather commentary. I inserted my article text.

Then, I went on the hunt for superhero pictures. You would think with all the superhero dress up costumes my kids have, it shouldn’t have been so hard. The problem was I didn’t want him dressed up in any licensed characters, because I thought it would cheapen the look. Instead, I found two more natural pictures that fit the theme.  The top picture is him at the water park in a rash guard flexing his muscles. I liked the water beading on his face and the tie in to his super ability to walk on water in the story.  The second picture is one from last Halloween. I made him a Lion-O costume from the Thundercats. I liked that in this pose, you could tell he was in a costume, but not necessarily which character it was. 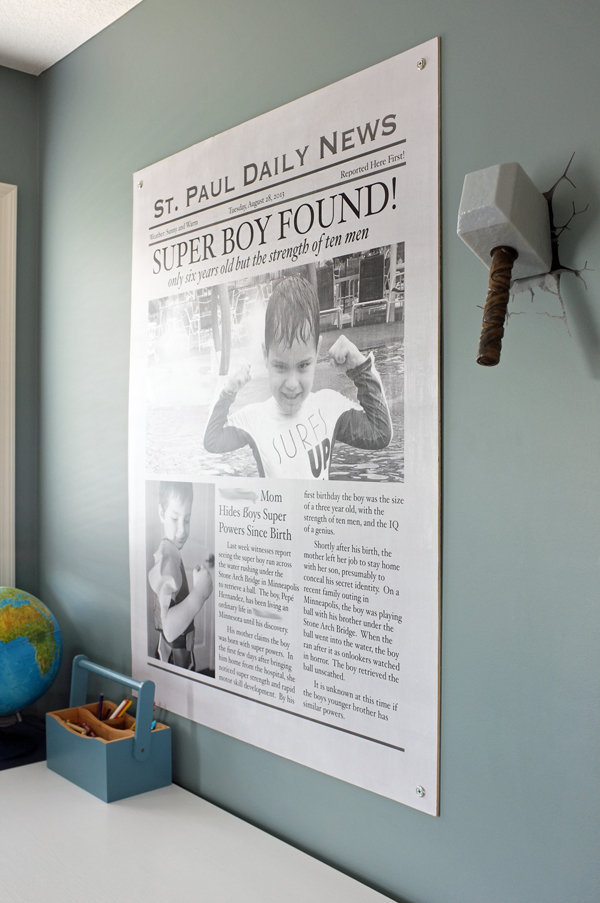 Once I had my faux newspaper made up on a regular 8.5 x 11″ size paper, I sent the file to my local Staples. They blew it up and printed it as an engineering print. The final print was 36″ wide and about 45″ tall.

I mounted the faux newspaper to a piece of 1/4″ thick wood cut to the same size. With my sisters help, I used Elmer’s permanent spray adhesive to fix the print to the board.  We started by laying the print on top of the board to make sure it lined up.  The print was about 1/4″ larger than the board on all sides. 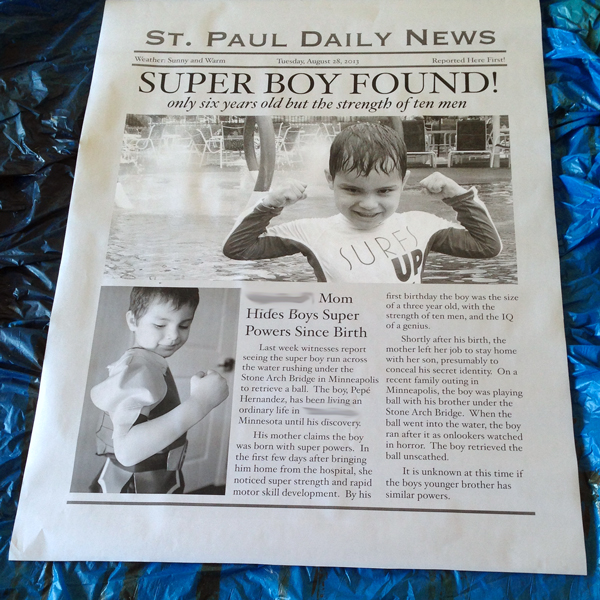 Then, we folded back one half and sprayed the board with the adhesive.  Four hands was nice for smoothing the print onto the board.  Then we folded over the other half and did the same. 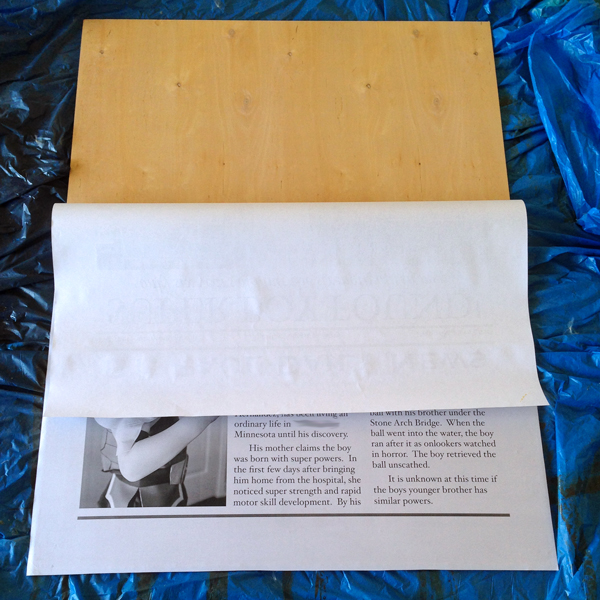 Once the paper was applied, we flipped the board over onto a large cutting mat and used a xacto knife to trim the excess paper.  I also did a light sanding right along the edge of the paper. 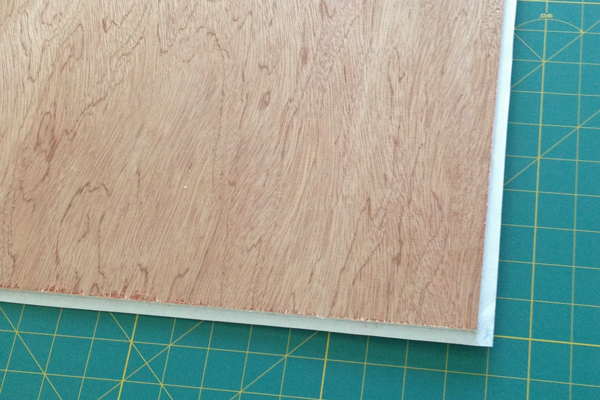 To seal the paper, I originally planned to use Mod Podge, but then got nervous about getting bubbles in the paper. On a whim, I decided to use Polycrylic instead. About a moment after slapping on a coat of Polycrylic, I began to panic.

When it started looking like this, I was horrified: 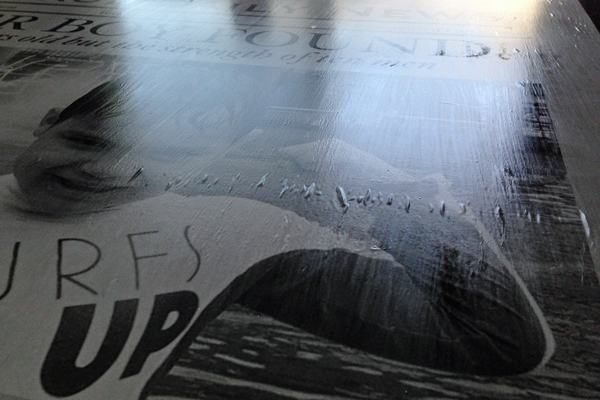 The paper was wrinkling and bubbling everywhere. With some quick thinking, I grabbed the small plastic card you use to apply wall decals, and smoothed out the paper. I drug the plastic card right through the Polycrylic.  It worked and took out all the wrinkles…phew! 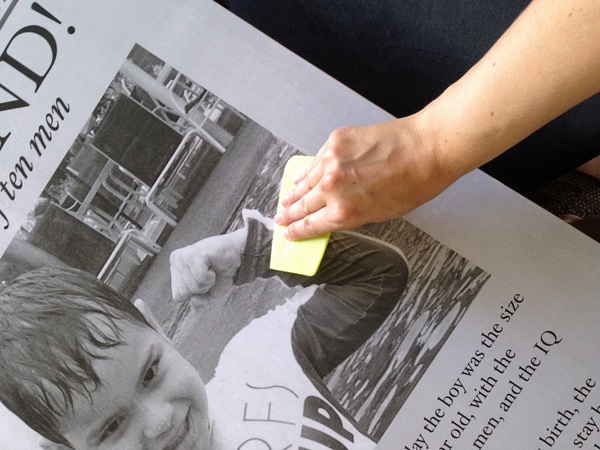 But, I noticed the ink was bleeding. It did not smear or anything, but the paper was overall noticeably grayer. In this case, I think it added to the faux newspaper look, so I didn’t sweat it.

I hoped my wrinkly problems would be over, but with the second coat of Poly there were more wrinkles. I used the plastic card again scraping across the surface until all the wrinkles smoothed out. I repeated the same for the third coat. In the end the print is securely mounted and perfectly smooth.  This was the still wet third coat: 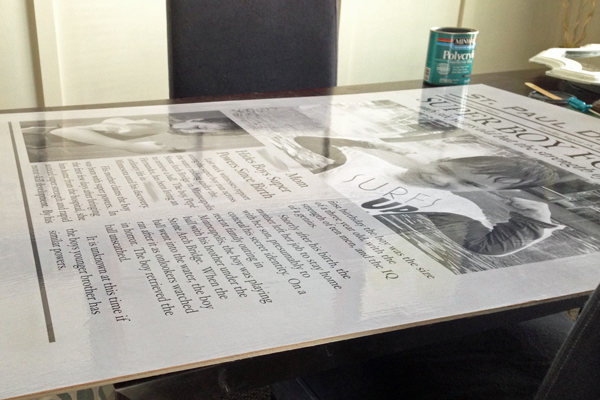 To mount the newspaper to the wall, I used screws and drywall anchors.  First, I drilled a hole about 1″ in from all four corners of the print.  Holding the print up on the wall, I marked the placement of the holes.  At each mark, I drilled and inserted a drywall anchor.  Before putting in the screws, I added a finish washer to each one.  The finish washer is the nickel part that looks like a collar around the screw.  It is a simple way to make the screws look nicer on the front of the piece. 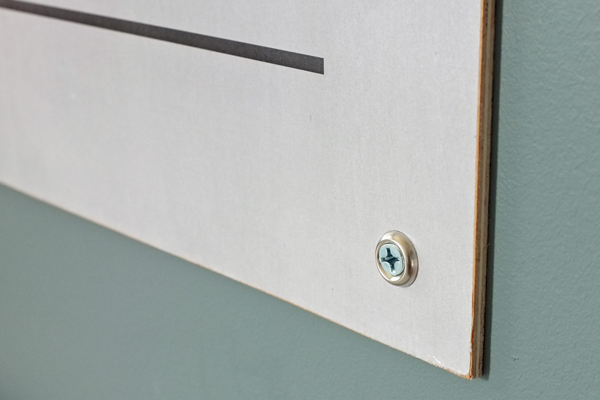 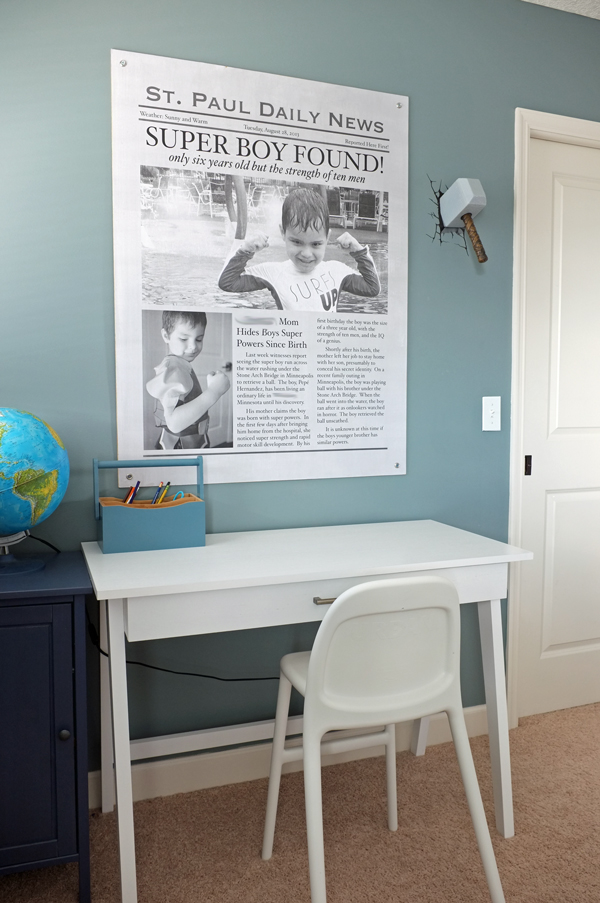 The giant faux newspaper makes a huge statement in his room.  I am sure in a few years he’ll find it embarrassing, but as a 6-year-old there is nothing better than seeing your own mug plastered on the wall.  I love how the oversized print gives some presence to his small-ish desk and really defines the study zone part of his room.  I am already plotting a variation on this project for his little brother’s room.

By the way, his friend Thor left his hammer at our house for safe keeping the last time he was over to visit.  It glows blue at night time :)