Thank you all for the sweet comments on the playroom mural.  I can’t wait to whip the rest of the room in shape and show you how the mural wraps around the room.  To hold you over until then, I want to share my secrets behind the making of the mural.

I am proof you do not have to be an artist to paint a wall mural.  A silhouette mural is a modern option that is easy for anyone to paint.  With my other secrets below, seriously anyone can paint a mural like this one. 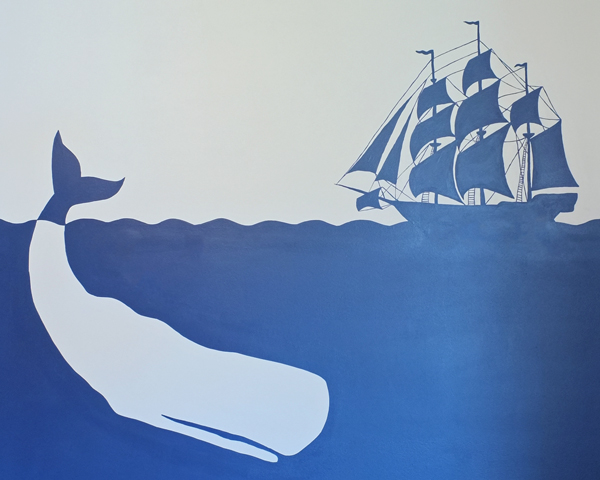 I consider myself creative, but I am not an artist.  Drawing a large mural on a wall free-hand would totally intimidate me.  I still ended up drawing on the wall, but not free-hand.

My secret is a cheap little projector.  I know other bloggers have scored classroom projectors to use for projects, but I have not had so much luck.  Then, I discovered you can buy a small projector at the art store.  They have several low-cost models. I chose to splurge just a bit, knowing I will likely use this for other projects in the future. 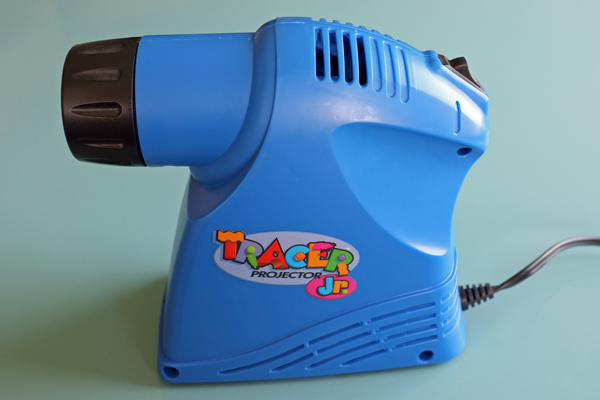 The projector is pretty simple.  There is a fluorescent light inside and a mirror that reflects the image out to the wall.  My projector can enlarge the image up to 10 times, making it ideal for putting a big whale on the wall! 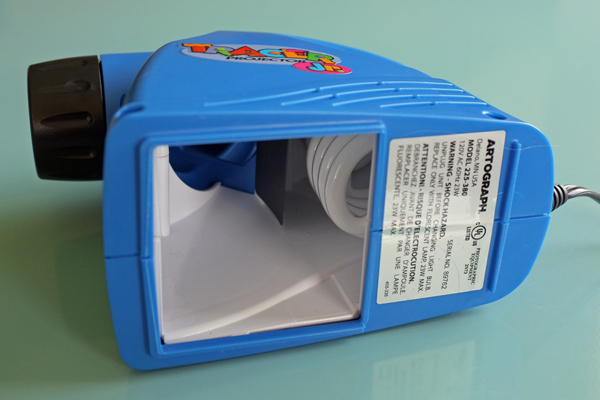 With the aid of the projector I transferred the outline of the whale and the outline of the pirate ship onto the wall.  I simply printed off an image of a whale and ship I liked.  With this projector there was no special transparency paper required.  You just set the projector on top of the picture.  The best time to project was late at night when I could turn off the lights and have a completely dark room.  With complete darkness you get the crispest image projected.  I used a pencil to trace the images onto the wall. 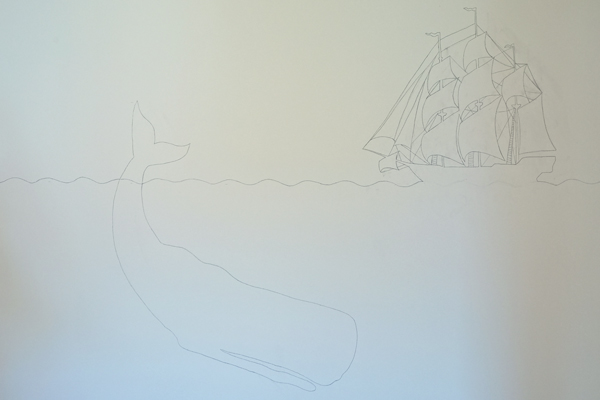 The next step was to paint in the outlines.  This is where I started to get intimidated.  Then, I realized it is just paint.  If I made a mistake, it could easily be fixed.  I started by cutting in the waterline with a brush and around the whale.  Those silhouettes were pretty easy.  After building some confidence on the easy stuff, I moved on to the pirate ship.  To tackle the ship, I pulled out a variety of random paint brushes. 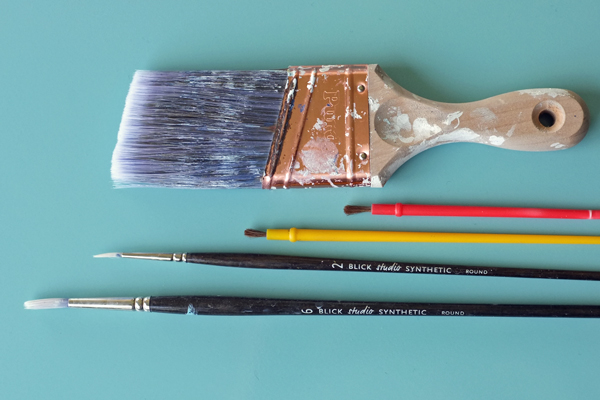 Again, I am not an artist, so I used what I had.  Amongst some random artist brushes I had, I also used some watercolor brushes from my kid’s art supplies.  You just need a variety of sizes.  The small brushes help in the detailed areas, while the larger brushes help cover large areas faster.

The two coats on the pirate ship took me a couple of hours to complete.  It was actually a highlight of my week last week.  Painting is a de-stressor for me, and in the midst of a busy summer I enjoyed every moment of blissfully painting the ship. 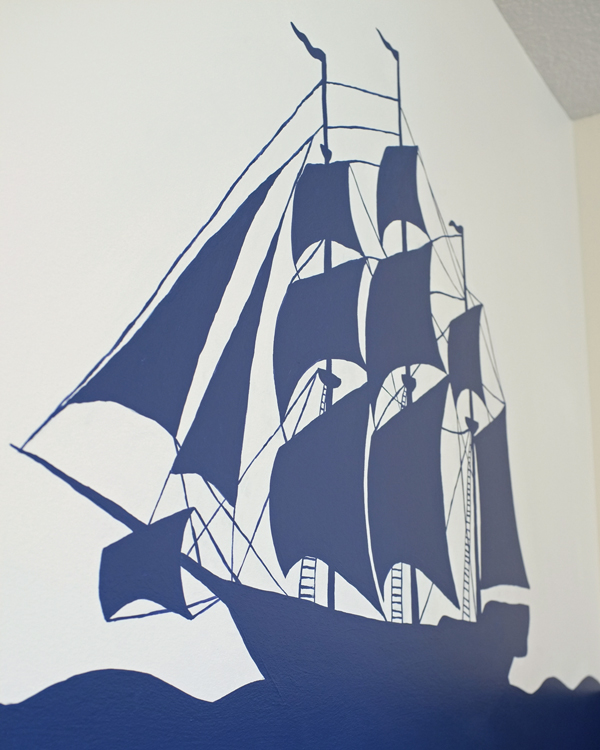 If I were to do it all over again, there are a few things I might change.  First, the pencil I used smeared easily, but the smears covered easily with paint.  I would probably try a different type of pencil or chalk the next time.  Second, I would opt for a different paint sheen.  I was using leftover paint from the studio focal wall in an eggshell sheen.  Because it took so long to cut in and paint the mural silhouettes, I can see spots where I didn’t keep a “wet edge” while painting.  A flat paint would not have caused the same issue.  Although, a flat finish would also not be as durable or scrub-able. Lastly, the perfectionist in me might have tried to tape off some of the areas on the ship to get the rope lines straighter.  My hand was shaky as ever while paining those lines.  In the end, I like the hand-painted look.  But if I wanted straight lines in the future, I would use a little painter’s tape. 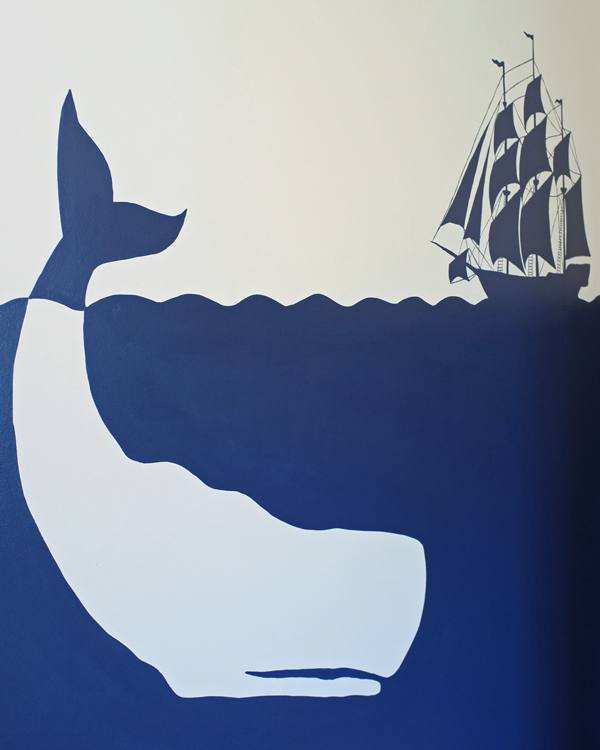 I love the impact this mural has on the feel of the playroom.  It instantly transformed the room into a whimsical space.  My boys will beyond the moon happy to play in here during the winter months.  All it took was a little paint and a little time.  They say painting the walls is one of the easiest ways to change the feel in a room.  Painting the walls with a creative mural is the easiest way to make a room feel magical!