It was a little over a year ago I gave you the first peek at our deck.  We have enjoyed it for a full spring/summer season now, but just recently finished up some care taking.  We had started last fall to stain the railings, but with cold weather moving in never finished.  Most recently, I shared our furnished outdoor oasis, but in the backdrop the deck care was still incomplete. 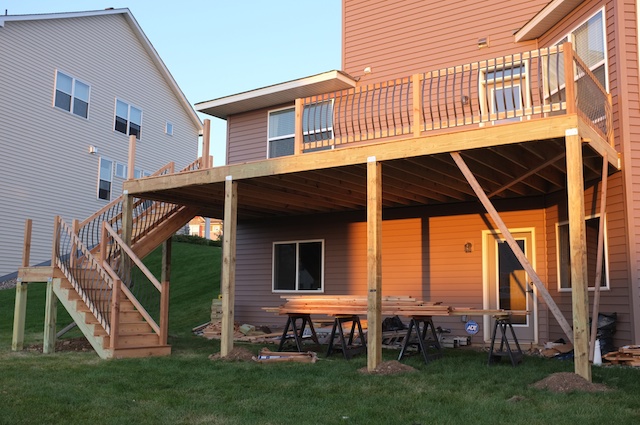 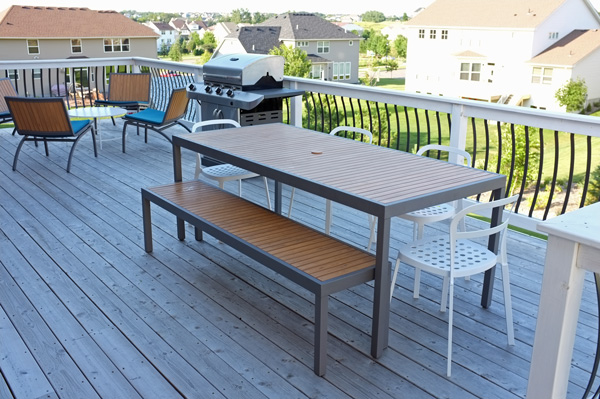 A few weeks ago I took a day off from work and made it a priority to oil the deck.  I was able to oil the entire deck surface (26 x 14 ft) in an afternoon.  Keep in mind, we had completed the white stain on the railings last fall. 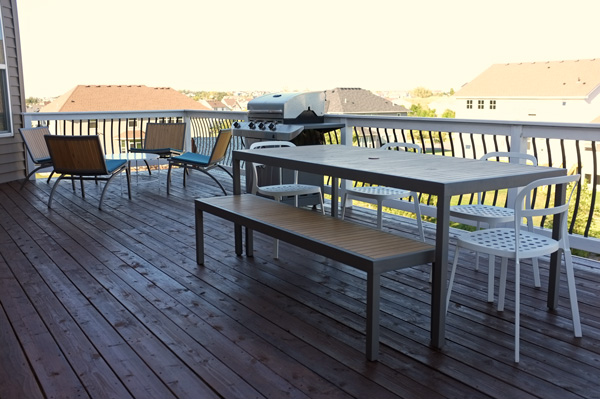 We did not originally plan to oil the deck.   We didn’t even know you could.  We had planned to stain it, but when we went to pick up supplies at Lowes the guy manning the paint center was very knowledgeable.  He recommended trying Cabot’s Australian Timber Oil instead of stain.  The oil applies in one coat and helps treat and protect the deck.  The color selection was limited, but we liked the darkest color called Jarrah Brown.

I started by “power washing” the deck the day before to remove the dirt and loose wood fibers.  We do not have a power washer, but we had a nozzle attachment for our hose that created a high pressure spray.  I had no idea how yucky a deck could get in one year.  After the dirt washed away quickly, we noticed all the loose wood fibers coming off.  The power washing was removing the grey from the deck and revealing the cedar wood beneath.  It took a bit of time to thoroughly prepare the deck.

On oiling day, I applied the oil with a lambswool roller.  I was a bit skeptical of the big fluffy roller, but the Lowes guy said it was the fastest why to apply and the directions on the can recommended it as well.  I simply rolled it on in sections following the boards on the deck.  I worked about 3 boards at a time.  After applying the oil with the roller, I went over each board in one long swipe with a large brush to work it into the woodgrain and even it out.  To avoid moving all the furniture off the deck, I pushed it all to one side.  Once I oiled the other half, I let it dry for a few hours.  Then I carefully, with hubbies help, moved all the furniture onto the oiled side and oiled the unfinished side. 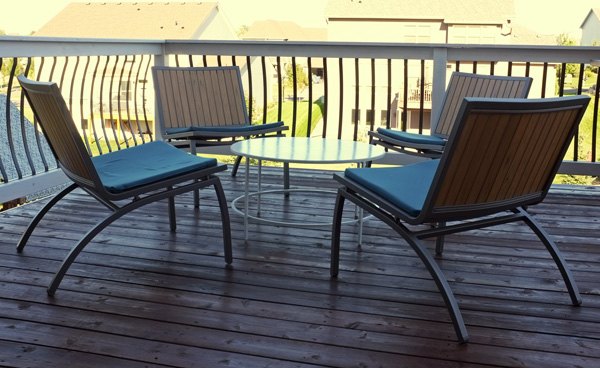 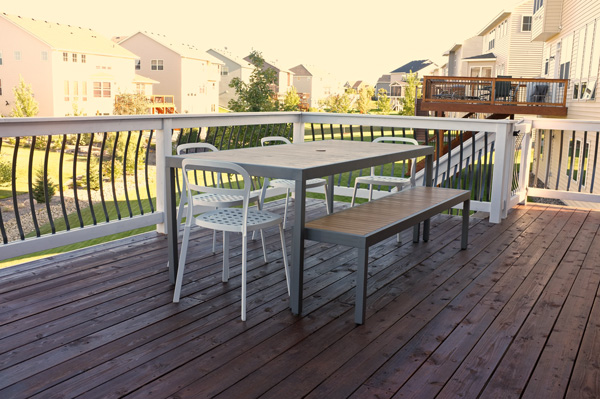 We love how it turned out!  The color is so rich and striking against the white railings and trim.  We wanted a nice dark brown color to contrast with the white.  The Jarrah Brown definitely has a red undertone, but it still provided the level of contrast we wanted.  It is also a beautiful contrast to the wood tone on the patio furniture.  Here is a closeup of an oiled board. 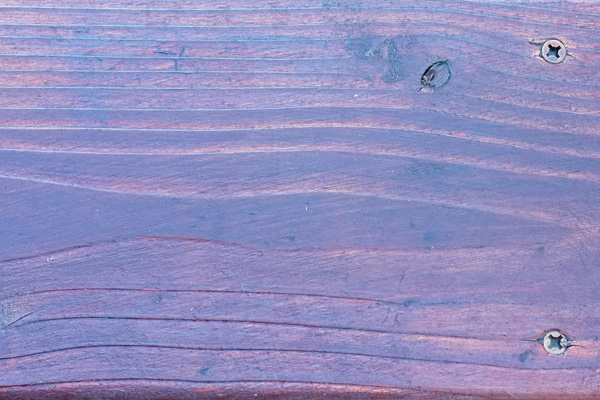 Now that the finishing on the deck area is done, you can see one of my favorite details.  All the decking is Jarrah Brown, but the skirt board wrapping the deck is stained white.  It frames the deck beautifully with a white boarder.  The rich brown and bright white lend a very nautical feel to the deck. 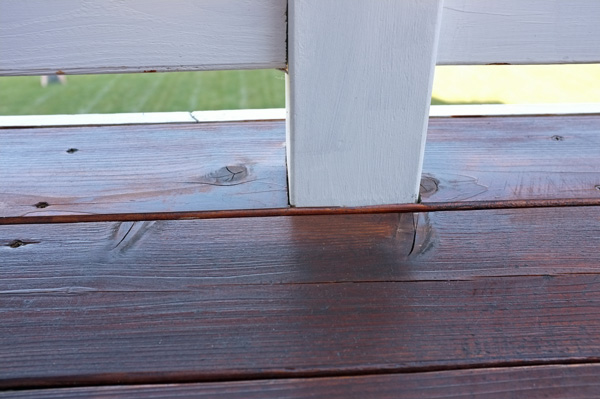 Our deck now literally repels water.  It is a classic oil and water scenario.  Since we oiled the boards, the water just beads on top.  Even in heavy rain the water puddles.  Once the rain stops the water evaporates.  It is actually cool to watch water hit the deck and bead up.  I guess our days of letting the boys swab the deck with their paint brushes (seen at the end of this post here) are over.  Maybe when it rains we can let them go out and jump on the puddles on the deck instead. 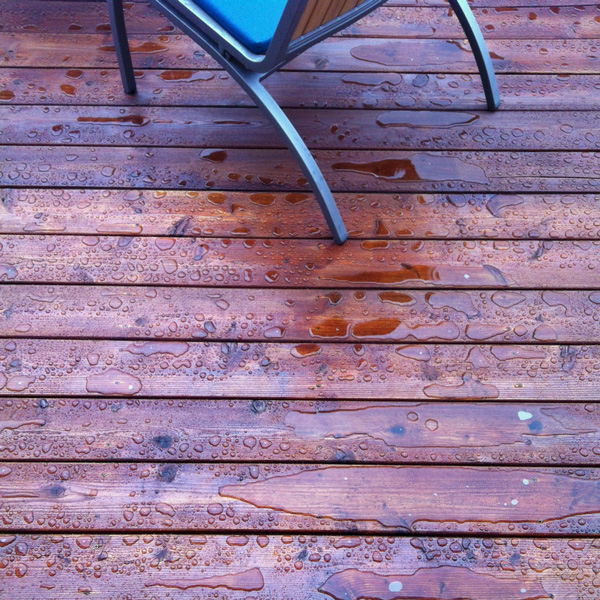 Before I go, I wanted to show you some of the completed details of the deck.  I wrote an entire post last year on some of the key details we chose for the deck and I wanted to give you an update on how they look today.  One of the biggest design elements of our deck are the arc balusters.  They make an otherwise square deck curvy.  No one else in our neighborhood has these balusters.  They are a bronze (dark brown/black) color.  Now with the rails stained white the balusters stand out in contrast.  Yet at the same time, when you look at the scenery beyond the deck the balusters fade away. 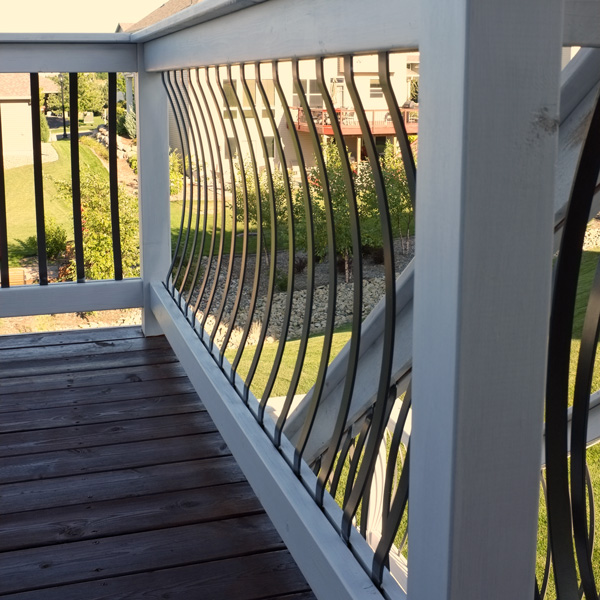 Another detail that was very important to us was the gate at the top of the stairs.  Instead of installing some sort of baby gate for the safety of our young boys, we asked the contractor to build a matching gate with a latch.  It even has it’s own matching balusters.  When the gate is closed it looks like the rest of the deck railing.  When it is open it blends in with the railing on the side.  The latch is a simple gate latch with a hole for a lock.  We just use a keychain fob through the hole that our boys are unable to open without help.  It is not 100% baby proof, but we always supervise them outside, so this works for us.  We wanted the “lock” to be easy for us to open to let the dog out when nature calls, but deter the boys from opening the gate. 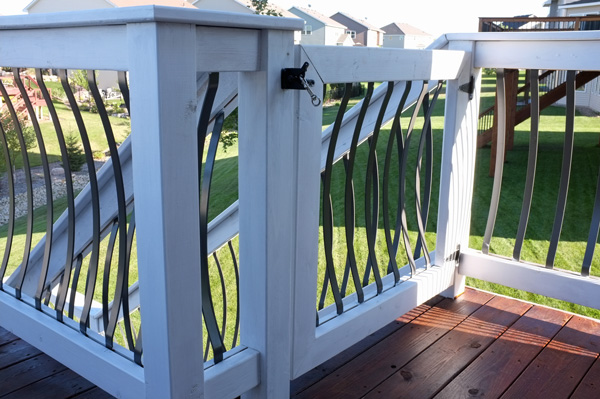 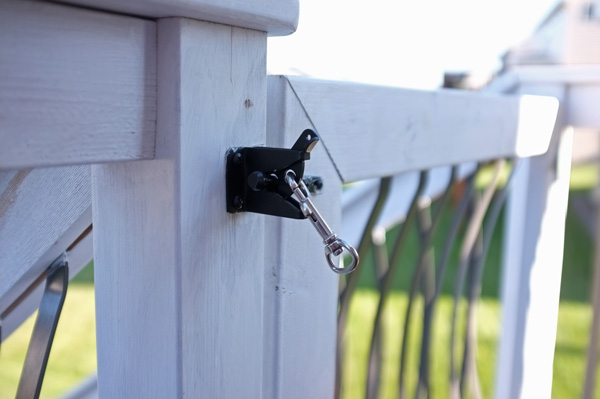 At the beginning of the summer, when we bought the grill on Memorial Day weekend, we set a goal to eat every meal possible off that grill.  I am pleased to report during good weather, and even in some inclement weather, we grilled out pretty much every evening.  The dining table on the deck was used almost every night and I thoroughly enjoyed not having to clean the table after dinner…the rain would do that for me periodically.  On the weekends, we grilled out for lunch, too.  The deck addition was certainly a welcome lifestyle change for us.  It enabled us to have an indoor/outdoor lifestyle and soak up as much of the beautiful Minnesota summer weather as possible.  With fall approaching, we are still grilling out and plan to until the deck is covered in snow.