Do you ever get to the point where you are so sick of something you can’t think of anything else until you fix it?  I got to that point recently with our kitchen utensil drawer after bringing home a set of new turquoise cooking utensils.  I made it a top priority to fix the sloppy kitchen drawers that very day.  My pretty new turquoise utensils needed a nice home.

This change might seem minor from the pictures below, but it was pretty drastic.  It is so important to think through the placement of everything in your kitchen when you move in, because chances are you will never rearrange it.  We are creatures of habit and you get used to where everything is in a kitchen, even if it is not the most efficient layout.  Making the small changes I made below was huge, because we had to modify our habits.  It has been over a week and I still open the wrong drawer at least once a day.

When we moved in, I thought it was nice that the largest drawer in the kitchen came fitted with a utensil drawer organizer.  It was the drawer just to the right of the stove.  Naturally, I loaded up all the compartments with our silverware and most used utensils.  The drawer seemed pretty convenient just across from the dishwasher. 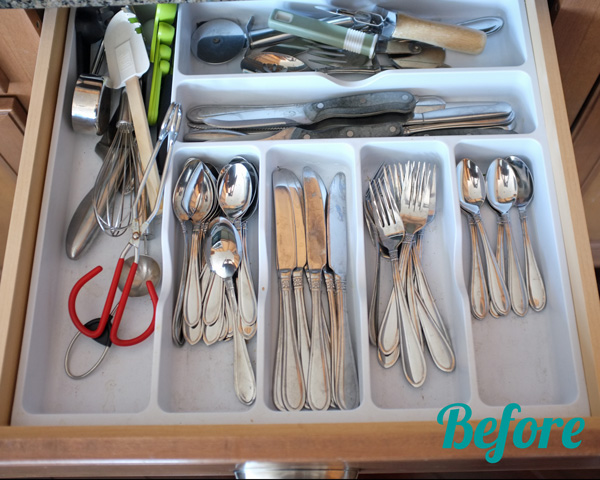 After over two years in this house, I have realized there are a few major downfalls with this drawer and organizer.  The more and more we cooked in the kitchen it became apparent this was not the best location for the silverware.  The person cooking at the stove always seemed to be standing in front of and blocking this drawer, requiring the table setter to nudge the cook to the side to grab the silverware.  Meanwhile the cook was taking lots of extra steps to go to the drawers on the left of the stove for cooking utensils. 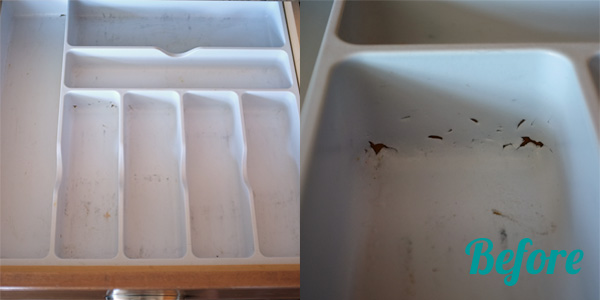 The plastic organizer inside the drawer was flimsy plastic.  Our steak knives were actually poking holes in it each time the drawer was opened and shut.  You’ll notice in the drawer picture above we had already relocated the knifes to stop the poking. 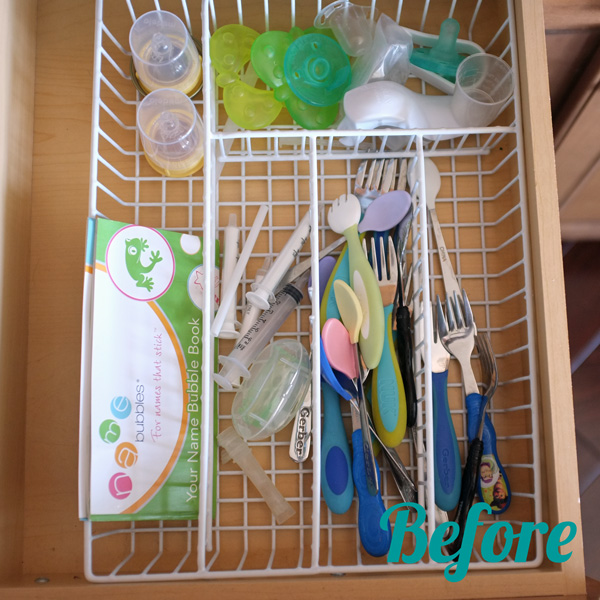 Nearby I had another drawer ripe for a makeover.  This drawer was once heavily used for baby supplies like medicine dispensers, baby spoons, and pacifiers.  We have been beyond the infant stage for over a year and a half.  This drawer became unused.  This drawer is further right from the stove, around the corner towards the fridge.  This drawer is smaller, but still plenty big enough for silverware.

These drawers required two things for a quick overhaul:

I ran out to HomeGoods and found several drawer organizers I liked.  I found a bamboo utensil holder for $9.99.  It was the perfect size for the smaller drawer and had enough compartments to hold all of our utensils.  I also found a few large white plastic utensil holders with grey patterned bottoms.  They were large enough to hold large cooking utensils.  The two compartment white tray was $7.99 and the single tray was $4.99.

The bamboo utensil holder was right at home in the smaller drawer.  I filled it with all of our silverware.  I used the longer compartment on the left to hold the boys spoons and forks.  Learning from the punctured holes in the old drawer organizer, I placed the steak knives horizontally in the back.  I also preferred them being in the back, so the boys cannot reach them.  They are never unsupervised in the kitchen, but we still like to keep sharp object out of reach. 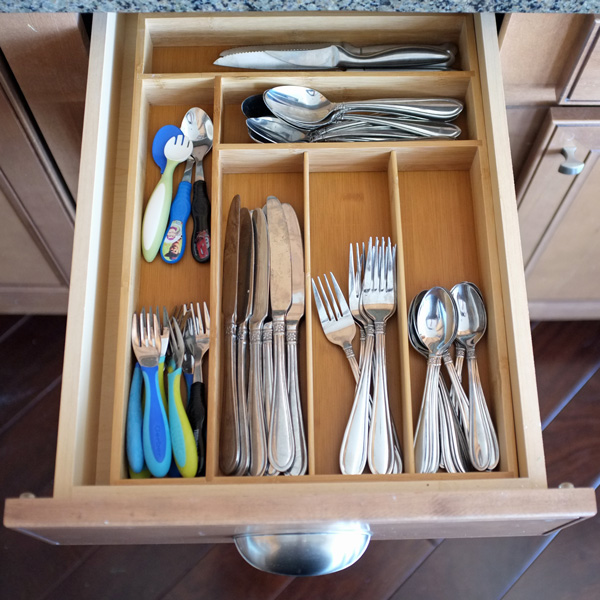 This drawer is outside the main cooking area of the kitchen.  The cook no longer needs to be disturbed for someone else to grab a fork.  My oldest has started helping set the table.  With this dawer away from the stove, he can come into the kitchen to grab the silverware he needs to set the table without getting in the way.

The white organizers fit well in the large drawer.  I decided to do something a bit unconventional and place them horizontally in the drawer.  This left a large space to the left for oversized spatulas.  I arranged our most frequently used cooking utensils in the white trays.  In the back I used one tray for measuring spoons and cups.  In the middle, whisks and wooden spoons (I stir everything with wooden spoons).  In the front I put all the tongs.  We use them often for cooking bacon and grilling meats. 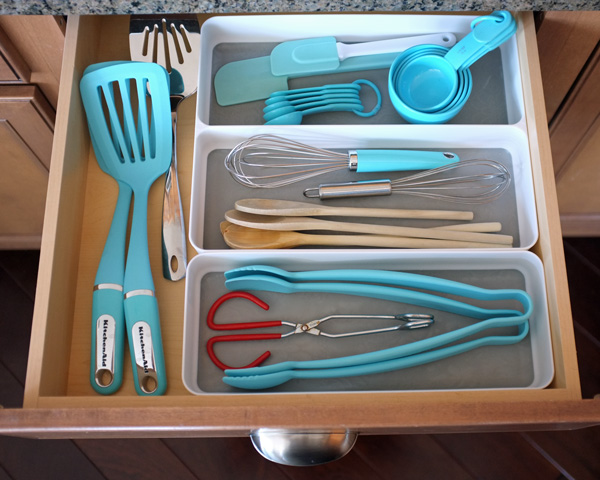 After all this we still have two more drawers to the left of the stove.  They were previously full of cooking utensils, most of which we never used, but dug through regularly to find our favorites.  I purged the drawers of all the utensils we never use.  Now I just need to get some more drawer organizers.  I think the far left drawer will be exclusively for baking…rolling pins, more measuring cups, etc.  The drawer right to the left of the stove can hold additional, less often used, cooking utensils, like garlic press, pizza cutters, etc.