My baby is 5!  Unlike all of his other birthdays, I did not plan a birthday party this year.  We were visiting family in Dallas over his birthday.  With the late summer vacation and the pending start of kindergarten, I decided against adding any stress to this time of year with party planning.  Celebrating his birthday was still important and I think I came up with the perfect travel solution.  Everything I needed to create what he dubbed “the best birthday ever” fit into a small box. 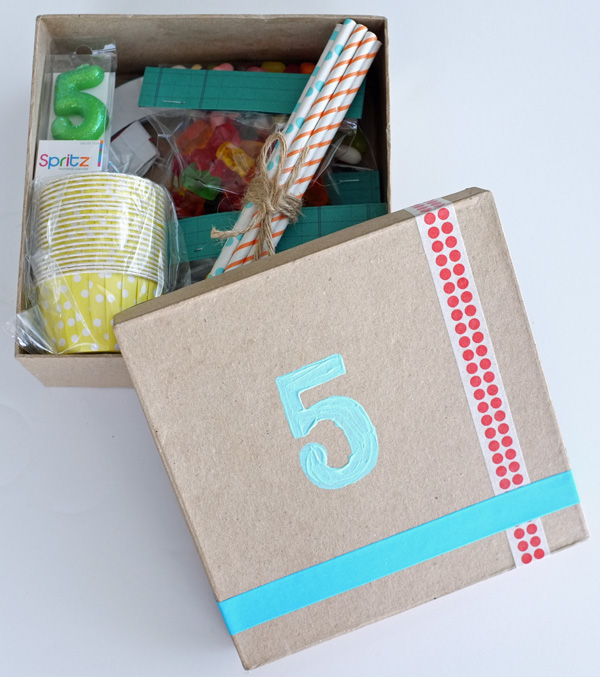 Ice Cream Party in a Box

I packed a party in a box and we brought it with to Dallas.  Our 5 year olds idea of a perfect party involves ice cream, cake, and candy.  Inspired by several party in a box concepts I pinned to my Pinterest Parties board, I created him an ice cream party in a box for his birthday.

While he was off at his last day of daycare, I scoured my cupboards and pantry for all the goods to create his box.   I had been picking up items, like the box and straws, here and there just for this project.  Other items, like the chocolate chips and baking cups, I had on hand. 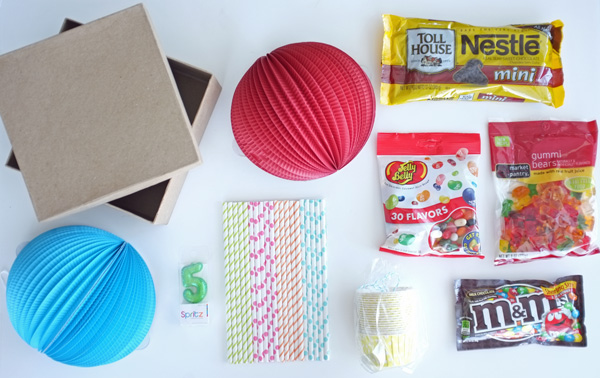 The paper mache box measures about 8 x 8″ square and 4″ deep.  I found it at Michaels.  The outside of the box lid was stamped with a number 5 and embellished with washi tape.  For a second, I was worried he was going to be more excited about the box than the contents inside, but soon enough he opened his surprise. 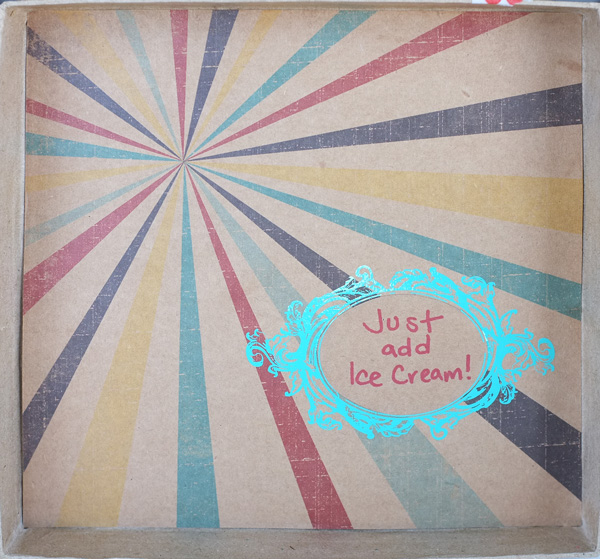 I covered the inside lid with a piece of scrapbook paper and an ornate frame rub-on.  To keep it simple, I chose a scrapbook paper with a kraft colored background to match the paper mache box.  Inside the rub-on frame I added an oval of plain kraft paper and wrote “just add ice cream”. 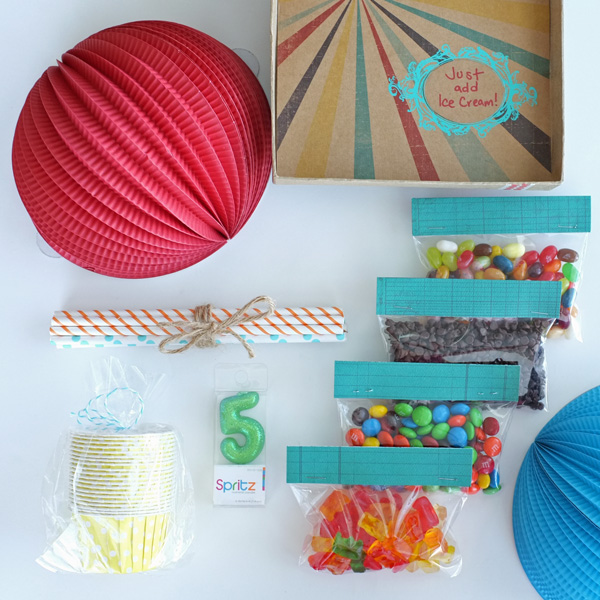 The box was full of lots of fun things for an impromptu ice cream party.  The yellow polka dot baking cups, I had purchased previously from Sweet Lulu, are the perfect size for a little ice cream treat.  They have a waxed coating and formed shape.  I packaged up four different kinds of candy toppings; mini chocolate chips, gummy bears, m&m’s, and Jelly Belly jelly beans (his favorite).  I put the candy in cellophane snack bags and topped them with scrapbook paper.  I folded the paper strips in half and stapled them to the bags.  I also included some fun party straws, from the Target Spritz collection, bundled up with twine.  For some easy party decor, I threw in some blue and red paper lanterns (leftover from the fourth of July).  Last but not least, the number 5 candle. 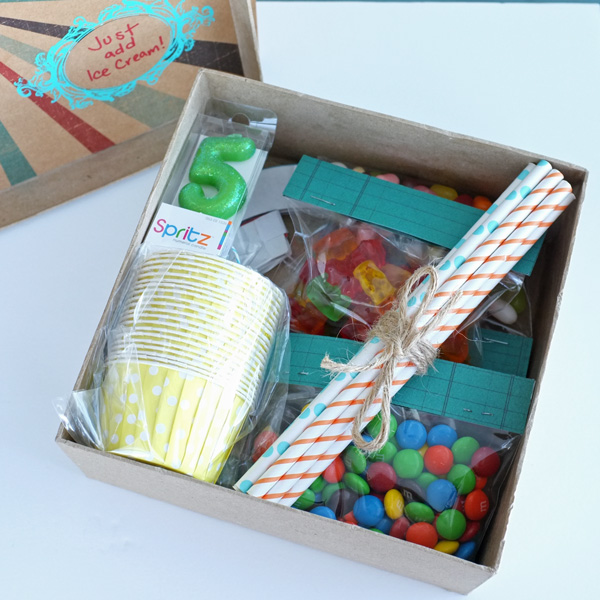 He never realized there was an impromptu ice cream party lurking in his presents.  I kept it a secret from him and let him open it at the end of the rest of his presents.  When he opened the box his eyes lit up with excitement!  That reaction was better than any party I could have planned for him. 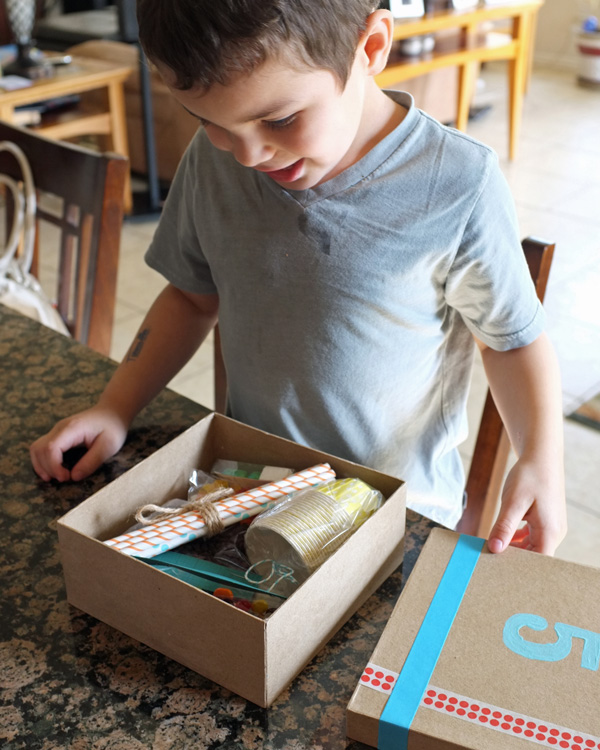 Earlier in the day we had picked up a few different ice cream flavors.  Since we were house guests, I opted for smaller cartons that would fit easily in my hosts freezer.  Part of the fun for the boys was choosing an ice cream flavor or two to try. 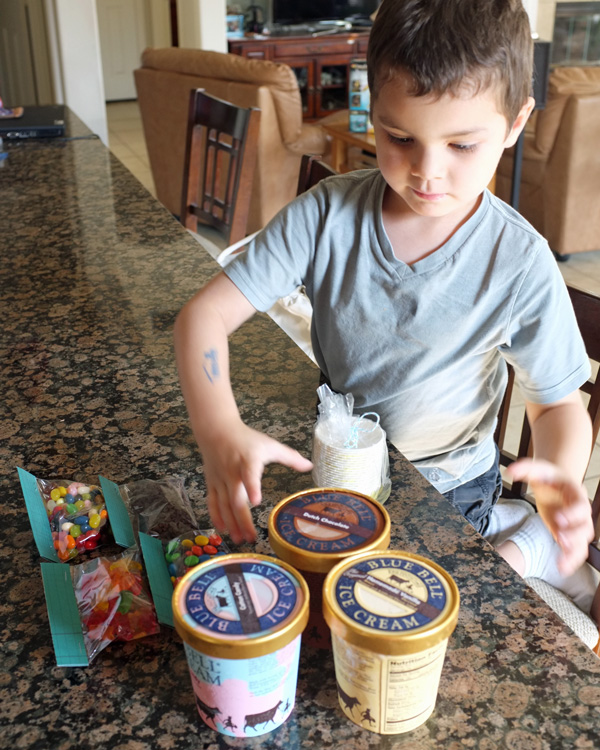 We opened the candy bags and poured them into random dipping bowls.  The boys really enjoyed choosing which candies to add to their treat and how many of each.  They both had seconds of candy.  There was a significant amount of concentration demonstrated during the candy selection process.  I thought of it as the calm before the storm…the candy, ice cream, sugar-crash storm that followed. 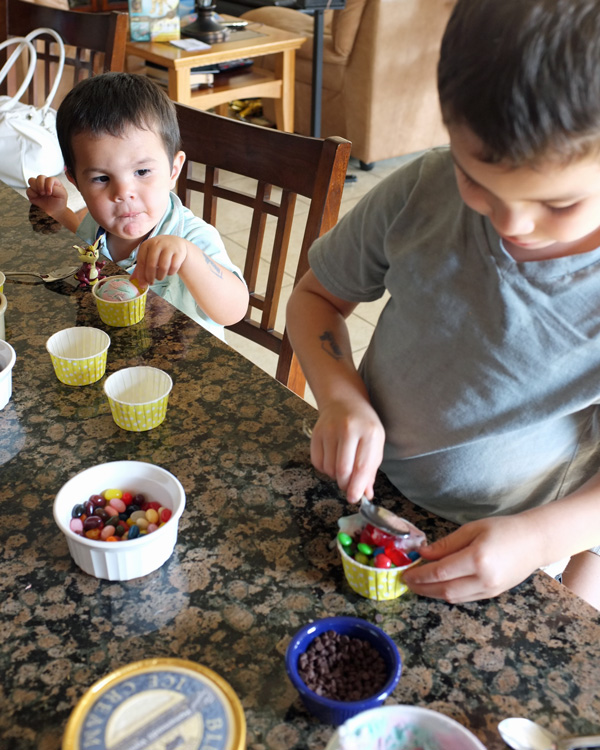 His day included breakfast at IHOP (our boy loves his pancakes), Legoland Discovery Center, and Sea Life Aquarium.  He opened several presents, including his first big boy lego set.  Despite all of that, it was this simple, inexpensive ice cream party in a box that elicited his declaration that this was “the best birthday ever”.  He repeated that at least 5 times as he stuffed his mouth with jelly bean laden ice cream.

What Makes “The Best Birthday Ever”

This simple birthday idea was a huge success, because of these three things:

Have you ever had to celebrate a kids party away from home?  What did you do to make it special?