This project was one of the best I have done in a while.  It is nothing remarkable, but it was free, quick, and my 4 year old was able to do it with me.  It is so great whenever you can include a child in decorating their own space…they love that! 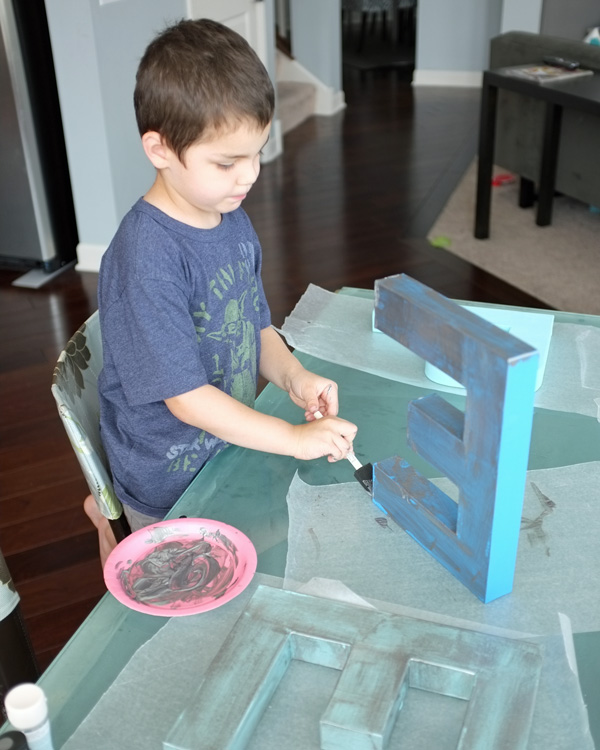 I originally purchased these paper mâché letters from Joann Fabrics for my son’s first birthday.  They spell out his nickname, Pepé.  They were painted blue and orange to coordinate with his first birthday party decorations.  Since then they have been in storage.

The area above his bed has been bare since we moved in.  I thought these letters would fill the wall space nicely, but they definitely needed a makeover.  I love the metal letters available from Restoration Hardware, but not the price.  So, we tried to recreate the look for less, or I mean, for nothing. 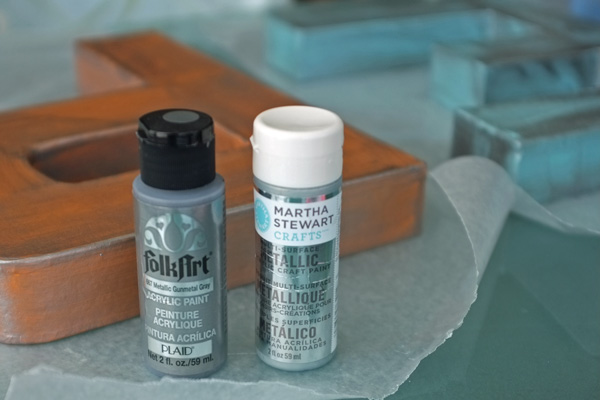 In my acrylic paint stash, I found a bottle of Folkart Metallic Gun Metal Grey and Martha Stewarts Metallic Silver.  We used them together to create a new metallic finish for our letters.  We loosely mixed the two shades with our foam brushes before slathering it on our letters.  The streaks where the color was not perfectly mixed only added to the metal patina. 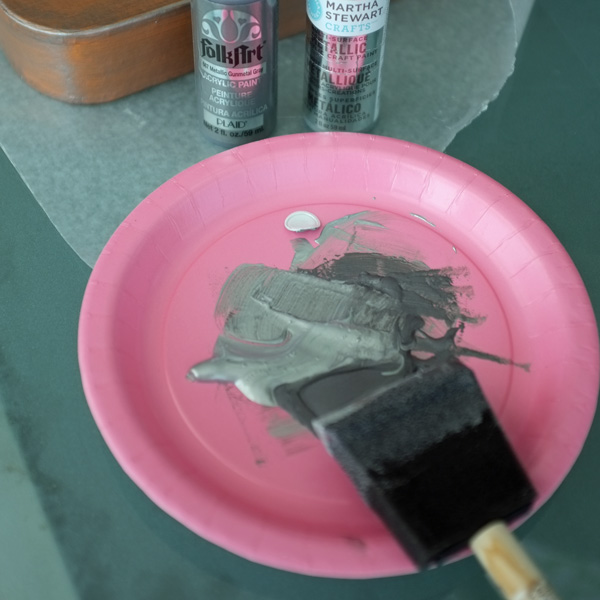 We did three coats of the dual color mix on each letter.  I wanted to ensure the blue and orange colors did not seep through.  While painting, I put the letters on wax paper, which removed easily when we were done.

This project was great to do with a four year old.  The more he smeared the paint on the more mottled look we achieved.  Even edge drips that would normally bother me on any other project, were fine here, because the raised edge looks like welded metal. 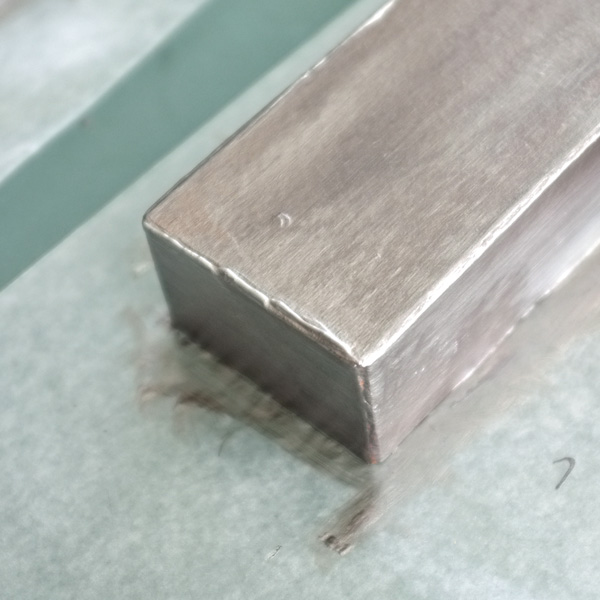 Once they were dry, we hung the finished letters with 3M command strips above his headboard.  They fit perfectly.  The letters are so light, we just used one Command Strip horizontally at the top of each letter.  We made sure each letter was straight with a level, before fixing to the wall. 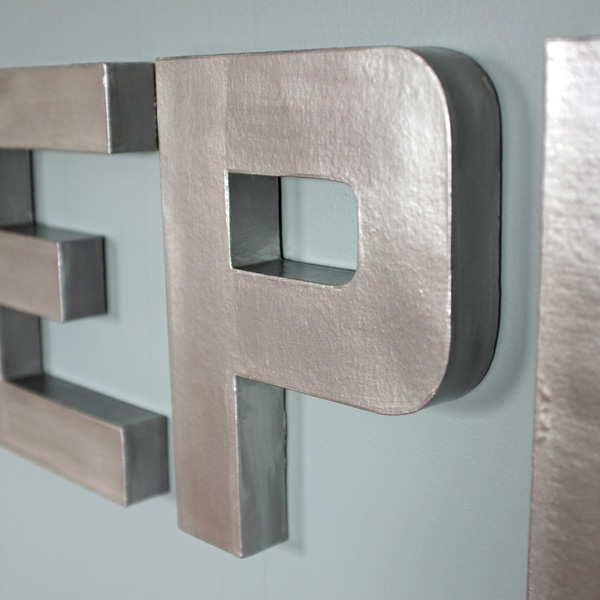 I have not shared much of his room before, mostly because I still have lots of unexecuted plans in here.  But I will give you a peek with this wider shot. 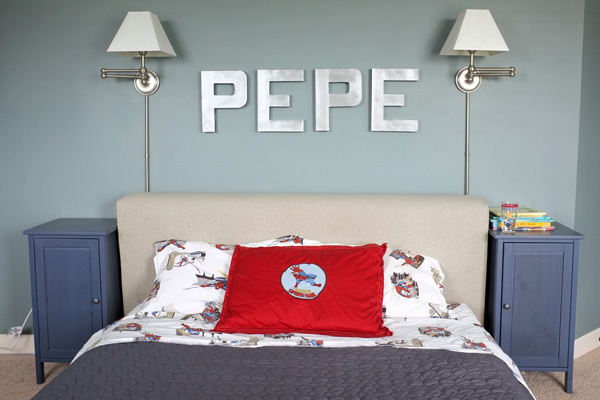 The wall color is Schoolhouse Slate by Martha Stewart.  It is a beautiful grey/green and the perfect backdrop for a superhero bedroom.  The upholstered bed was a Room & Board outlet find for under $300 in queen size. We got a mattress from Ikea.  The two blue nightstands are from the Hemnes collection at Ikea, with lots of storage for bedtime story books.  The sconce lamps are from Pottery Barn kids, used originally flanking the changing table in his nursery.  They are perfect for a kids room, because I don’t have to worry about him knocking over a table lamp on his nightstand.  The Spiderman sheets and sham are from Pottery Barn Kids.  We also have the batman and superman ones (all bought during sales).  The grey quilt is from Target.  It has a little texture with the modern quilting, but it is lightweight.  The reverse side is black. 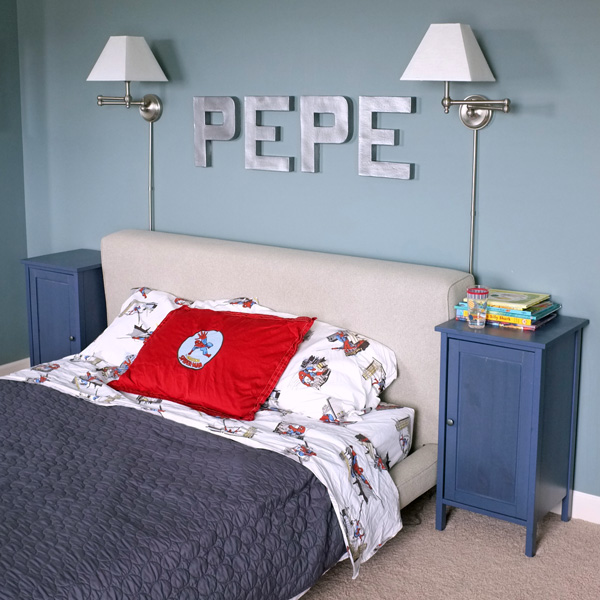 With his new faux-zinc letters, this bed vignette is all pulled together.  The project was no-cost and done in under 30 minutes!