I have gotten a little sidetracked from the foyer with Christmas decorating and the nursery project list.  Since my littlest will turn two in less than four months, I thought it is high time to finish the nursery.  You know, just in time to turn it into a big boy room.  Considering how slow things seem to move around here sometimes there will actually be no rush for a big boy room conversion.  In fact I would not plan on changing much, other than swapping the crib for a toddler bed.  Eventually I think the animal theme will transition into robots, but that will just be changes in art and accessories.

Speaking of art, I finally got some hung in the nursery.  Besides our challenging mirror wall, there is another uneven wall in this house.  I wanted to hang a large canvas art piece above the changing table in the nursery.  This alphabet art, a jumping off point for the nursery design, previously lived above my older son’s crib in our town-home.  I had mounted it to the wall there with about a dozen large command picture hanging strips, which worked well.  Since the frame still had strips on one side, I thought I would hang it the same way in this house.  I mounted it with the 3m command strips, holding each one firmly for 30 seconds.  I stood back to marvel at my work and then I left the room.  Then I heard a crash.  At first I blamed the picture strips that had worked so well before.  Then I realized some of the strips never even stuck to the wall.  When I held the art back in place I noticed the frame was not flush to the wall.  There were several  spots where the strips did attach.  This wall was uneven too. 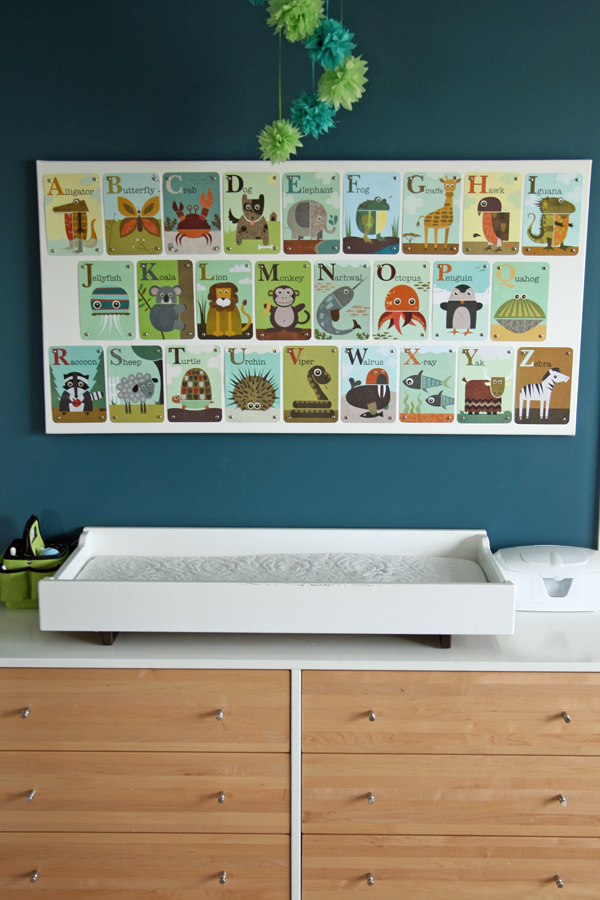 I needed a way to hang art above the changing table.  Hanging it on a nail with wire was not an option.  Babies love to grab everything.  We actually hung it on the nail for a while, but it drove me nuts because he would always knock it crooked and try to pull it off the wall.  It made me nervous. 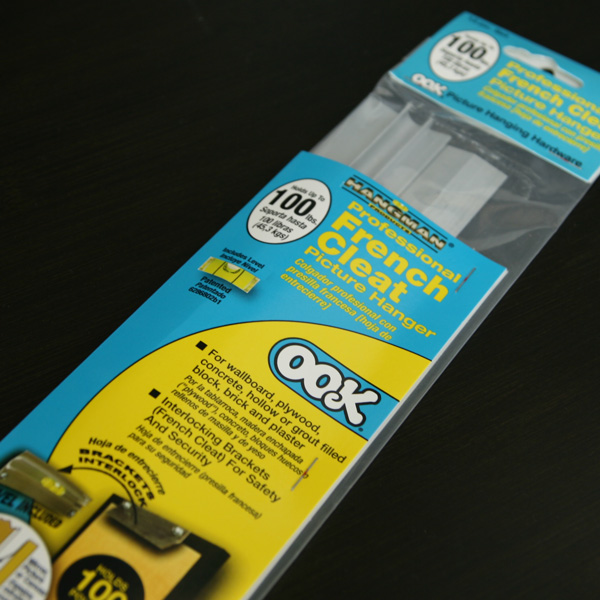 I was about to face screw it directly into the studs…a la the artwork hung in an Applebee’s.  Don’t worry I would have made it look a little better with finish washers.  But then I ran across this french cleat kit at Home Depot.  A french cleat is normally made of two pieces of wood with edges cut at opposing 45 degree angles.  One is mounted on the wall with the beveled edge up and angled in towards the wall.  The other piece then sits on top with opposing angles sort of interlocked.  I have seen this a bunch on DIY shows for mounting headboards directly too the wall.  I never though of using the french cleat, because I am pretty sure it takes som sort of special tool to rip that 45 degree angle.   I did not know there was a ready-made version.  The french cleat kit I found came in three sizes and is made of metal.  The largest cleat can hold up to 200 lbs. 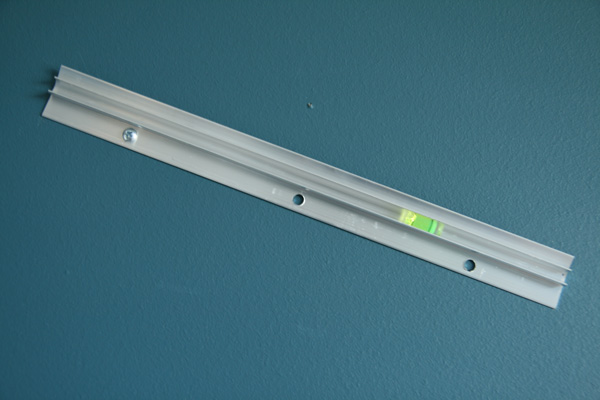 The piece you mount to the wall has a groove where you can slide in the included level to make sure you hang it straight.  When you put in the first screw you do not have to worry about it being level. 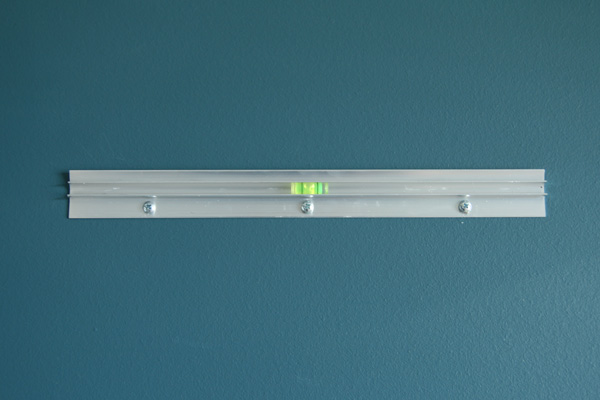 Then use the included level to make sure it is level before attaching the other screws. 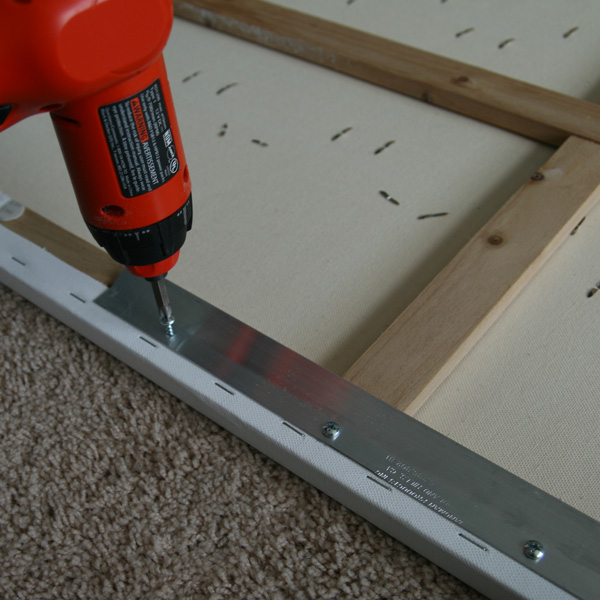 You mount the other plate on the piece of artwork.  I screwed it right into the wood frame of the canvas. 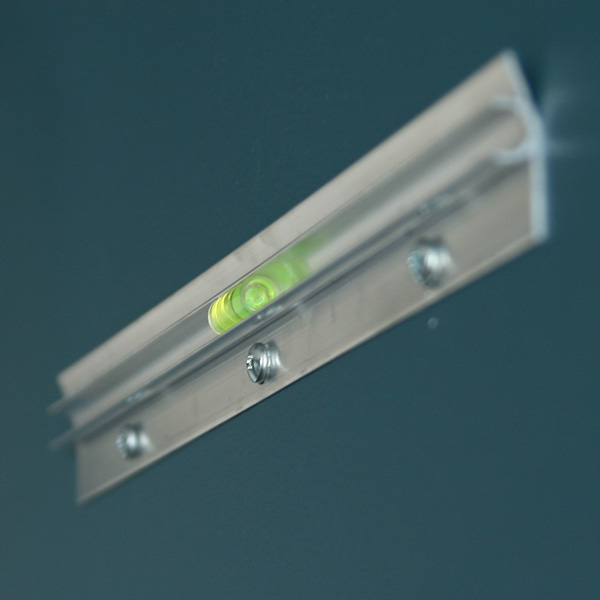 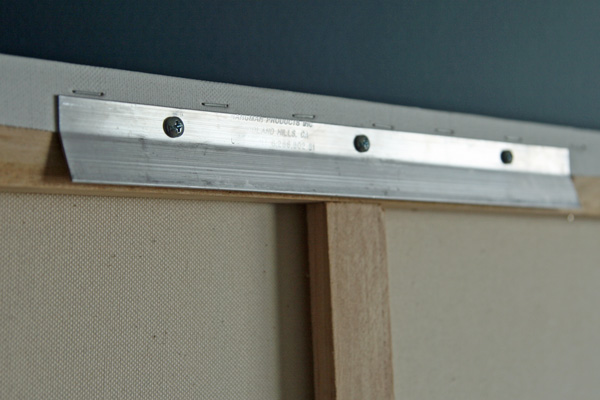 The cleat on the artwork slips into the cleat on the wall.  Easy as that.  Best part is, the art can’t really budge like it does when hung on a nail.  It also can’t be pryed away from the wall easily.  This was a great solution for the nursery.  Now instead of messing with the artwork to get mommy’s reaction, my son actually spends his time on the changing table pointing at the different animals.