I started sharing bits of our playroom, the mood board and the finished reading nook, but I don’t want you thinking we have all our toy storage under control.  Far from it!  I think toy organization is an ongoing, never-ending battle.  The toys in our house spill out beyond the designated playroom.  We have a lego table in the living room under the family gallery wall.  We also have the built-ins on one side of the living room stuffed with toys. 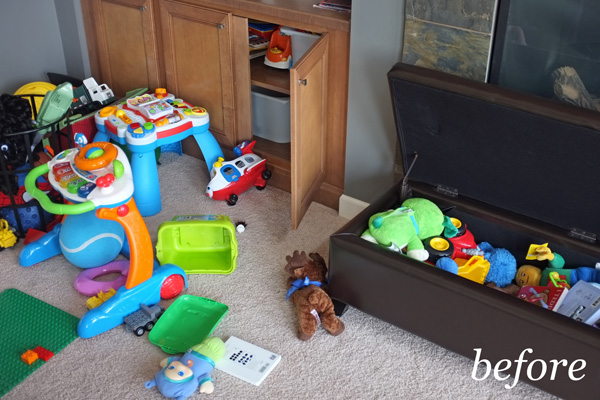 I thought we had it all under control, until I stepped back one Saturday and saw this disaster.  How had so many toys migrated to the living room?  How were there so many not being put away?  Well, we kept accumulating without getting rid of any toys and I had gotten lax about straightening them up every evening.  I was just happy if they kind of got put away.  But this mess was out of control. 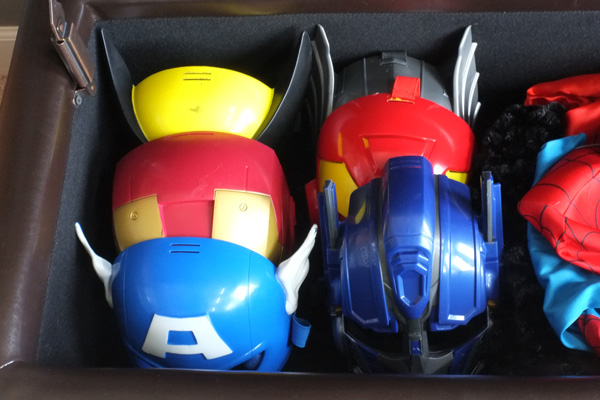 I rounded up the toys the boys no longer played with and put them in the basement.  My four year-old helped sort the remaining toys.  We realized most of what was left were legos (duplos) or dress up clothes.  The bin under the lego table and the bins in the built-in storage hold all the legos.  The newly cleaned out storage bench was the perfect spot for the dress up clothes. 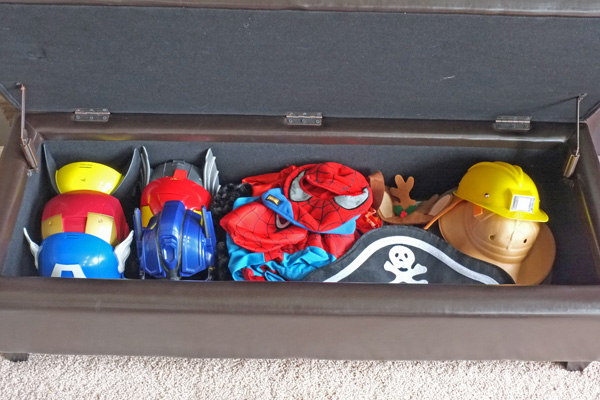 The boys love dress up.  Before I had kids I thought dress up was only for girls.  I was pleasantly surprised to find out boys love it just as much.  I stocked their dress up wardrobe with super hero masks, inexpensive foam hats from Michaels, and former halloween costumes.  I organized them neatly, even though I knew they would not stay that way for long.  And they didn’t.  The boys don’t put everything away as neatly as I would, but with the bench designated for dress up storage they at least get all the masks and capes in one place.