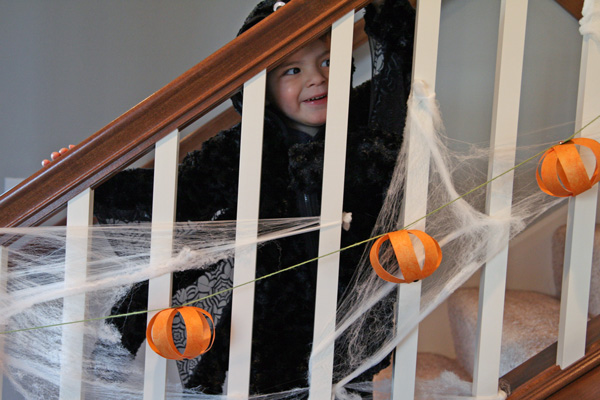 Yikes…there is a giant spider sneaking down the stairs!!!

Last year I went all out making the costumes for the boys.  My oldest (3 at the time) told me for months leading up to Halloween that he wanted to be a spider.  I was happy to oblige, but not very happy with the spider costume patterns I found.  I did not want a cheesy, cutsie spider with a big green belly.  I wanted something a little more real.  I finally settled on making it up as I went along.  Luckily I had help from my mom and sister.

I found this really cool faux fur at Joanns.  It has a rosette type swirl and I have seen it used before on throw blankets.  I loved the texture it would add to the spider.  Not only was he furry, but sort of bumpy too (I imagined a real 35 lb. spider would be a little ruffled up).  As awesome as the fur turned out, I was not prepared for the tiny fur fluff it left behind EVERYWHERE.  The cutting was the worst.  After that I tossed it in the dryer for a quick spin to remove any loose furs. 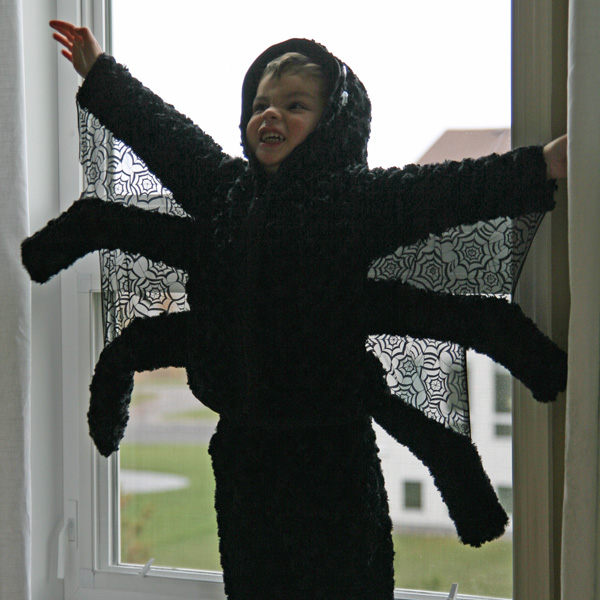 My sister had a pattern for a toddler hooded sweatsuit in her stash.  My mom helped me modify it to make it big enough for a 3 year old.  To turn it into a spider, I needed to add 2 more legs on each side.  I planned to sew the legs into the side seam of the sweatshirt, so they would stick out below his arms.  I wanted them to move when he moved his arms.  I saw other costumes where this was done with string, but I was nervous about it getting tangled or being a strangling hazard.  I found this awesome spider web tulle fabric and decided to create webs between the spider legs.

To create the extra legs I made a faux arm just slightly longer than the arm on the sweatsuit pattern.  I sewed a piece of webbing into the seams of the leg.  Then I created another leg and sewed it to the webbing of the first one.  I stuffed the arms with the extra fur trimmings from cutting out the sweatsuit.  I finally sewed the webbing of the two extra legs into the seam of the sweatshirt arm continuing down the seam on the side of the sweatshirt to attach the legs.

The fur made attaching a zipper a little tricky and trying to hem fur is not very fun.  The fur backing does not fray or unravel, so at the wrists and ankles I left it raw.  I used black bias tape to “hem” around the hood and where the zipper needed to go.  Then I was able to easily sew a zipper onto the bias tape.  I used wider bias tape to hem the top of the pants and to create a casing for the elastic. 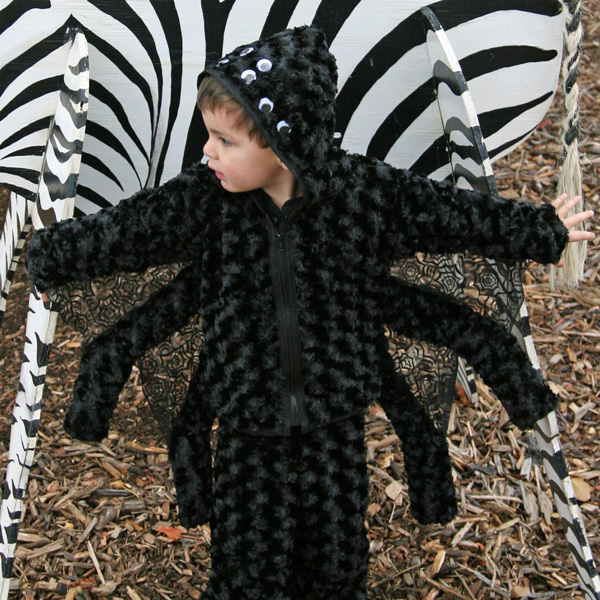 To top it all off I sewed googly eyes onto the hood…8 eyes that is.  The stick on eyes were not an option on the fur.  I found large 1 inch googly eyes with a loop on the back like a button for attaching.  I sewed them on by hand (after googling images of spider eyes to determine placement…don’t do it…GROSS). 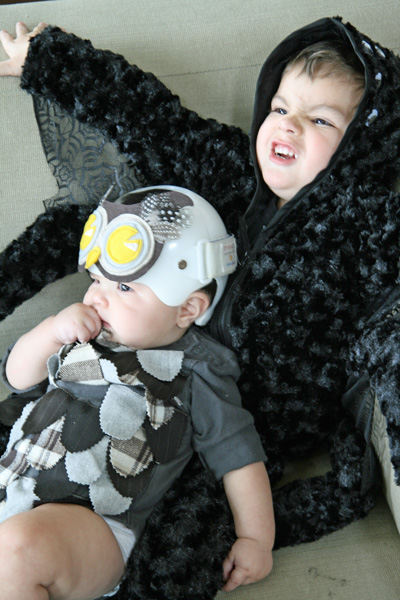