We had a whirlwind of activity happen around the time of my youngest’s birth.  Most notably, we bought a new house a few days after bringing him home from the hospital.  We moved when he was only a month old.  With so much activity we allowed very few visitors after his birth.  We were shoulder deep in moving boxes.  Yes, I spent my maternity leave packing…and unpacking.  Don’t worry, I still found plenty of time to cuddle with my baby.

When all the dust settled and most of the boxes were unpacked, I wanted to have everyone over to meet the baby.  I had heard of some people doing a baby shower after the fact, but since this was our second there was no baby shower.  Then i learned about a Sip & See.  It seems traditionally a sip and see is a party where guests come to see the baby and have a sip of champagne to celebrate.  As a nursing mother I was not really into the sip part, but I definitely liked the see part.

There are so many inspiring version of the tiny party, that I just could not help myself from making “tiny” the party theme.  I loved Armelle ‘s tiny party invitations and tiny party favors.  The Creativity Room shared her tiny party complete with adorable tiny food.  I just knew this theme would be perfect to welcome a tiny baby!

My first order of business was to make the tiny invitations.  I printed a simple black and white invite (above) with my laser printer.  I glued it onto a piece of decorative paper and then folded in half.  They turned out to be less than 3 inches square when folded, which is rather difficult to address and mail.  So I decided to put them in 4 envelopes each.  Each envelop was slightly bigger than the last.  We received so many comments on how it really set the tone for the party when they got to the tiniest envelope.  The largest envelope was sealed with a label that read “Open Me”, the next envelope had a label that read “Now Me”, the next envelope read “Then Me”, and the tiniest envelope read “Read Me”.  It was very Alice and Wonderland-ish (you know “eat me”, “drink me”). 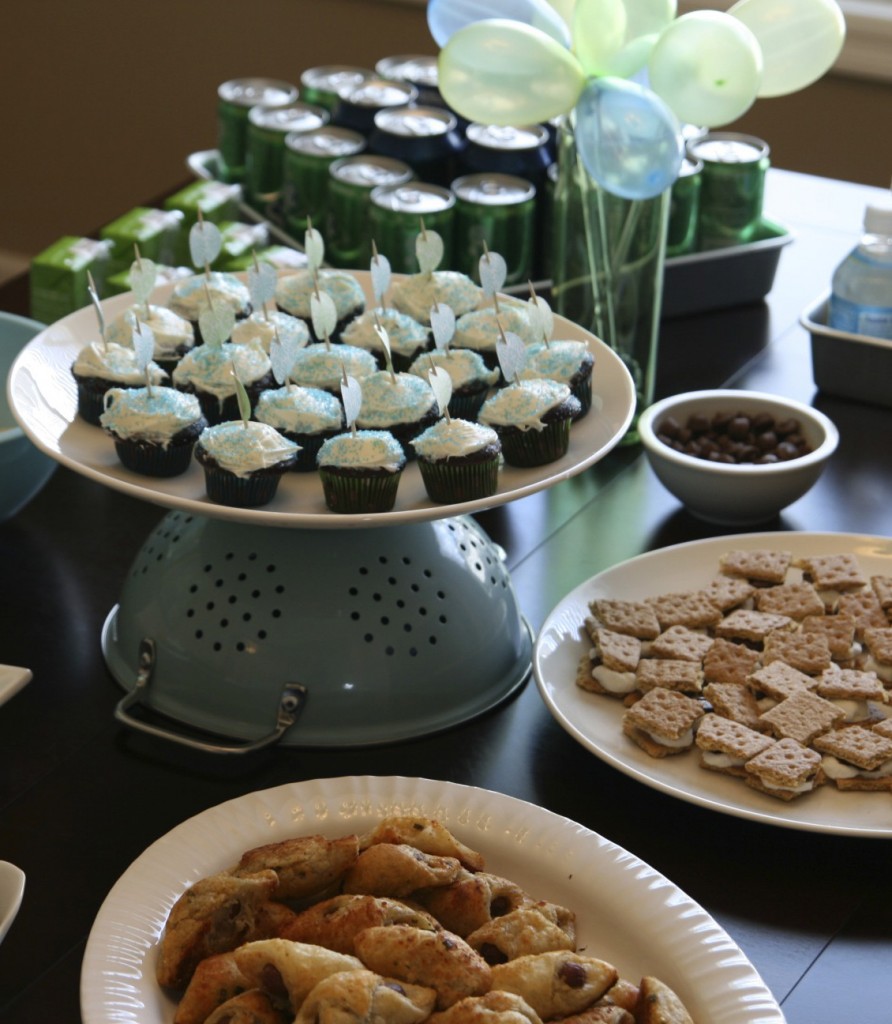 I went all out with every kind of tiny food I could think of, including mini wrapped hotdogs, mini pizzas, mini cans of sprite and pepsi (went with color scheme), mini water bottles, baby carrot and broccoli.  (Yes, that is a colander upside down topped with a platter for a make-shift cake stand…at least it was in keeping with the color scheme).  For desserts there were mini cupcakes and mini s’mores.  My favorite treat by far was the mini s’mores.  They were incredibly easy to make.  Follow the directions below to make mini or full size versions of your own…year round in the oven. 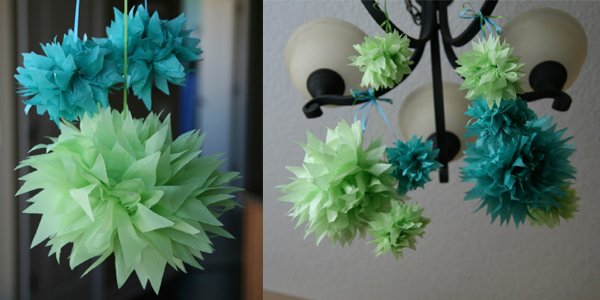 I also went overboard making mini decorations too.  The first thing I made were the tissue paper pom poms to hang from the light fixtures.  Instead of full sheets of tissue paper I used half and quarter sheets to get the small and tiny versions.  I used scrapbook paper triangles sewn to a length or ribbon to make the mini bunting.  I used Martha’s double-sided alphabet stickers to make the glitter letters.  You just adhere the double-sided sticker and then sprinkle with your glitter of choice.  I also used an idea I saw on the Armelle blog to make mini balloons.  I used water balloons and taped them to the end of straws.  They made great table decor. 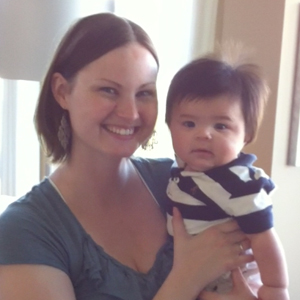 Here is a pic of me and my baby from the party.  This party was so easy to pull together that I really got to enjoy the party with Jax.  The tiny food and decorations made for great conversation as every one passed around our tiny new baby.  The older kids all wanted to take a tiny balloon home.