I have been dreaming of creating a photo gallery full of white frames.  I was very jealous when I saw how well Sherry and John pulled off their gallery hallway.  Their frame wall actually made it onto my inspiration board for the family room.  I loved their eclectic mix of frames that were collected over time.  The white ties them altogether so nicely.

Well, when it comes to most things I am pretty impatient.  As much as the idea of collecting frames over time sounds romantic, I was not about to wait to create my frame wall.  Instead I tried to do my best “collecting” by shopping my own house and buying a few inexpensive frames at my favorite source, Target.  I know Ikea is good as well, but they had a similar style at Target and the frames and mattes were a crisper white in my eyes.  From around my house, I scrounged up the two bamboo frames.  I loved the depth and thought they could easily be painted.  I spent less than $125 on the frames.

To determine which frames to purchase, I first planned the layout.  I noted the frame sizes available at Target and then went home to start planning.  I did not have any newspaper to create templates, but found some kraft paper leftover from our move.  I measured and drew rectangles to correspond with the frame sizes.  For the frames I had on hand, I just traced around them.  I cut out all of the templates.  I also made a template of a letter H for the monogram I planned to use on the frame wall.

I played around with the templates until I came up with an arrangement I liked.  I decided I wanted the overall arrangement to be a large square.  I chose a frame to anchor each corner of the square and then arranged the rest to fill in the gaps.  I liked the idea of small groupings within the larger grouping.  For example, I grouped the two oval frames together.  I also kept mirrors of the same size and style adjacent to each other and perfectly aligned (I can be a perfectionist to a fault). 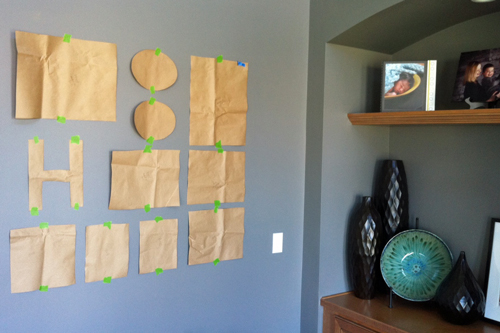 The last step in the planning process was to tape the templates on the wall.  I used painters tape to stick them up on the wall.  This allowed me to get a true sense of what the frame wall would look like before making any nail holes.  After shifting the templates a bit here and there, I was super happy!  The arrangement was orderly, but eclectic.  I immediately went out and “collected” the other frames I needed to purchase based on my template design.

Then the templates remained on the wall for almost a week… 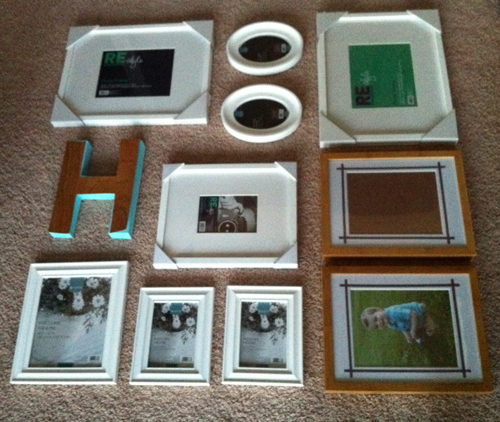 I laid out the actual frames on the floor and fell even more in love, but I just did not have time right away to get them hung.  I procrastinated because I knew I would have to find the right pictures for each frame, use a level to make sure I hung them straight…blah…blah…blah.  Isn’t it funny that really minor things can sometimes make us stall?  Finally I got them all up and I am still doing a few finishing touches.  I will share the finished project later this week (see finished gallery wall).